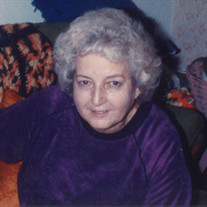 Willie Fay Coffman, born May 30, 1929 to Percilla Ann (Williford) and Dillard Lee Coffman in the Labanan-McMillan area. She passed away on December 27, 2020 in Tishomingo, Oklahoma. Willie attended school at Mannsville, Dickson and graduated from Russett in 1953. She met the love of her life at a ball game between Ravia and Russett, Earnie Jake Coffman (no relation) and the two were married in Sherman, Texas in 1947. Earnie passed away in 1986. They have one son, Earnie Wayne Coffman and wife Linda of Kingston. Willie worked 23 years at the Madill Sewing Factory and then transferred to Dee’s Sewing Factory in Tishomingo where she retired after 20 years. She was bored staying at home so she went back to work as a grandma at the school for 11 years. Willie loved to cook and sew. Her and about 15 friends used to go dancing all the time in Atoka, Sulphur, Mead and down on Lake Texoma then go back to her house to eat. Willie is preceded in death by her husband, Earnie Coffman and parents, Dillard and Percilla Coffman. Those she leaves to cherish her memories are her son, Earnie Wayne and wife Linda of Kingston; sister, Dee Fry of Ravia, grandchildren, Shannon Dempsey and husband Steve of Tishomingo, Michael Coffman and wife Bobbie of Blanchard, Bobby Coffman and wife Angie; great grandchildren, Lauren, Cooper and Hudson Coffman, Cole Weatherbee and wife Erica, Tyler Coffman, Presley Folsom; great-great grandchildren, Laklynn and Koeden; nieces and nephews, Charles Allen of Ravia, Mike Coffman and Jimmie Coffman of Ardmore, Toby Coffman, Cody Coffman, Johnny Coffman and Diana Graham; a host of friends and other relatives.

The family of Willie Fay Coffman created this Life Tributes page to make it easy to share your memories.