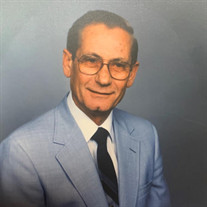 William Oliver Hunter Jr., son of William Oliver Hunter Sr. and Emily May (Glenn) Hunter. W.O. was born December 11, 1932 in Blue. Oklahoma (Bryan County). He passed from this life on November 9, 2020 at the Oklahoma Veterans Center in Ardmore, Oklahoma at the age of 87 years, 10 months and 9 days. W.O. grew up on the banks of Blue River; fishing, hunting and camping. Even in his later years he fondly remembered and shared stories with his family of his wonderful childhood in Oklahoma. W.O. attended the Blue Public School in Blue, Oklahoma. After high school, W.O. enlisted in the United States Army on March 6, 1953. During the Korean War, Corporal Hunter served in Germany as an armed utility vehicle driver and field radio mechanic for one and a half years. Friends and family of W.O. knew him as a man of great humor. For example, when he left Germany to return to the United States, W.O. said, “The Atlantic Ocean sea levels rose due to all of the tears of the “frauleins” he met and left behind while stationed in Germany. He resigned from the army on February 26, 1955. After returning from overseas, W.O. met and married the love of his life Atha Orlene (Thomas) Hunter on April 6, 1957 in Durant, Oklahoma. They made their home and raised their two sons in Denison, Texas where they resided for over fifty years. Unfortunately, due to serious health problems, Orlene, his beautiful “blonde” bride passed away at the age of 64. W.O. will be fondly remembered as a kind, family man with a generous soul. He loved taking the family to Lake Texoma for fishing and camping. He also had a passion for donating to several charities. He would tell stories of how he, as a young boy, and his father would hitch up the wagon at Christmas; delivering food to the widows and the children of Blue. W.O. enjoyed cooking for his family, like his special recipe of chili, grilling steaks and making beef jerky especially for his “deer hunting” and camping with his sons and grandsons. During his early working career, W.O. was a farmer. Later he enjoyed building the “special” boats of the Yellow Jacket Boat Company of Denison, Texas owned and operated by the famous Roy Rogers and Dale Evans. Then for thirty-five years, W.O. was employed by Wonder Bread of the Nestle Corporation in Denison, Texas. In his retirement years, he loved camping and fishing in his RV on the family property in Blue just as he did in his childhood years. Surviving W.O. are his sons, William Dale Hunter Sr. and wife Claudia of Lake Kiowa, Texas, Marty Lynn Hunter of Kenefick, Texas; sister, Donnie Tucker of Springtown, Texas; grandchildren, William Dale Hunter Jr. of Pottsboro, Texas, Justin Hunter of Kenefick, Texas, Summer Hunter of La Porte, Texas, Jennifer Barber of Baytown, Texas, Alicia Riggenbach of Keller, Texas, Leslie Whitley of Denison, Texas; thirteen great grandchildren. W.O. also, leaves behind numerous nieces, nephews, and a host of other family and friends. W.O. is preceded in death by his parents; an infant son, Dee Wayne Hunter, one sister, Francis Tate of Durant, Oklahoma; daughter-in-law, Connie Hunter of Kenefick, Texas. A graveside service to honor and celebrate William's life will be held on Friday, November 13, 2020 at 11:00 AM at the Tishomingo Cemetery.

The family of William Oliver Hunter created this Life Tributes page to make it easy to share your memories.