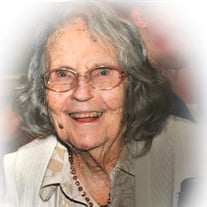 Vera Lahoma Wilson Huitt was born November 28, 1922, to J.E. and Beulah Franks Wilson in Rifle Colorado. She departed this life, surrounded by family, on September 21, 2019, in Oklahoma City at the age of 96 years, 9 months, and 24 days. Lahoma grew up around Seminole Oklahoma and moved to the Wynnewood area around 1936. She married Gains Huitt on November 4, 1940 and graduated as Salutatorian of her Wynnewood High school class in May, 1941. Their first child Tracy was born November 16, 1941. After Tracy’s birth Gains and Lahoma lived in many places but finally settled on the Lazy H Ranch 3 ½ miles North of Wynnewood in 1952. On November 28, 1960, which happened to be Lahoma’s birthday, their son Keith was born. She and Gains lived on the ranch until 2000 when they moved into town to be closer to family. For the majority of her adult life Lahoma worked in the home and on the ranch. For a brief period, she and Gains owned and operated Huitt’s Drive-In in Wynnewood but quickly realized that the restaurant business was not for them. Following their retirement, Gains and Lahoma were very active in the Wynnewood Band Boosters, following the band everywhere they went. Lahoma was a member of the Wynnewood Home Demonstration Club for many years. She also volunteered with several charitable organizations and was a member of Whitebead United Methodist Church. Lahoma was preceded in death by her parents J.E. and Beulah Wilson and by her husband Gains Huitt. She is survived by her brother Ralph Wilson, children Tracy Huitt Sires and Keith Huitt, grandchildren Vickie Hall, Kelly Sires, and Sabrina Weiss, great grandchildren Jason Hall and Brandon Hall, as well as their families and a host of friends that are close enough to be family. Visitation will be Monday September 23, 2019 from 5 to 7 PM at DeArman Funeral Home in Wynnewood. Services will be held on Tuesday September 24, 2019 at 10 AM at the Whitebead United Methodist Church with burial following at Oaklawn Cemetery in Wynnewood. Services are under the direction of DeArman Funeral home of Wynnewood, OK.

Vera Lahoma Wilson Huitt was born November 28, 1922, to J.E. and Beulah Franks Wilson in Rifle Colorado. She departed this life, surrounded by family, on September 21, 2019, in Oklahoma City at the age of 96 years, 9 months, and 24 days. Lahoma... View Obituary & Service Information

The family of Vera Lahoma Huitt created this Life Tributes page to make it easy to share your memories.