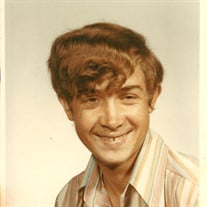 Tony Brent Lee was born on November 20, 1954, to Billy Eugene Lee and Mary Alyene Blankenship Lee in Wynnewood, Oklahoma. Tony Passed away on February 12, 2022, at Mercy Hospital in Oklahoma City, Oklahoma at the age of 67 years, 3 Months, and 8 days. He attended school at Wynnewood. After school Tony went into the Navy for a short time. He worked at several jobs before moving to Oklahoma City, where he went to work for his brother Keith, at Keith's Transmission shop. Some of his favorite memories where when he worked with Keith. Tony's younger years were spent at the family’s home in the country. You could find him playing in the creek with his brothers and goofing off with his friends. Tony also spent a lot of time with his Grandpa Blankenship running around and picking up pecans. Fun times were spent at Turner Falls with his brothers and cousins swimming in the blue hole while parents were visiting. Tony made his home in Tuttle, Oklahoma and lived a secluded life where he enjoyed his privacy. He did not like pictures taken and (his family saw little of him) because he enjoyed being at home. Tony is preceded in death by his father Billy Eugene Lee, his older brother Joe Mike Lee, and his nephew Michael Stewart Lee. Tony Is survived by his Mother Mary Jarrel of Pauls Valley, and older brother Billy and wife Virginia of Wynnewood, a younger brother Keith Lee of Mustang, Oklahoma, 3 nephews Clint Lee and wife Amy of Wynnewood, Brian Lee and wife Andi of Shawnee, and Bruce Lee of Mustang, one niece Tammy Middleton of Ada, 5 great nephews and 2 great nieces. Memorial service will be held February 21, 2022 at DeArman Funeral Home Chapel in Wynnewood, Oklahoma, and he will be laid to rest at Oaklawn Cemetery also in Wynnewood, Oklahoma

Tony Brent Lee was born on November 20, 1954, to Billy Eugene Lee and Mary Alyene Blankenship Lee in Wynnewood, Oklahoma. Tony Passed away on February 12, 2022, at Mercy Hospital in Oklahoma City, Oklahoma at the age of 67 years, 3 Months, and... View Obituary & Service Information

The family of Tony Brent Lee created this Life Tributes page to make it easy to share your memories.