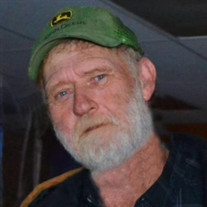 Tommy Clines Isenberg, 69, of Tishomingo, passed from this life on December 29, 2020 at Blue River Nursing Home in Tishomingo, Oklahoma. Tommy was born on August 3, 1951 in Durant, Oklahoma to C.W. and Ollie Harner-Isenberg. He grew up as one of eight children; 7 boys and 1 girl. He would like it noted that he was the strongest, and the most handsome of his brothers. He graduated from Tishomingo High School. Tommy’s happiest hours were spent with his family and growing things. He would say “I don’t want to brag, but I’m a better farmer than my brothers.” Tommy was a generous, loving, caring man who always worried that others had everything they needed; he hated more than anything for someone to go without. Tommy could walk into any room and light it up with his smile and witty remarks. This world isn’t as bright of a place without the ornery gleam in his eyes and his laughter in the air. Tommy is preceded in death by his parents, C.W. and Ollie Isenberg; brothers, Bill and Carlton Isenberg; sister-in-law, Nancy Isenberg. Those he leaves to cherish his memories are children, Ty Isenberg and wife Christa of Sulphur, Amy Miller and husband Ronnie of Madill; grandchildren, Reagan Miller, Addyson Miller, Kandle Fort, Preston Fort, Skyla Alberson; great grandchildren, Keldon Stephens, Kilynn Stephens, Kambrie Farmer; siblings, Patsy Adams and husband Danny of Milburn, Eddie Isenberg and wife Sheila of Fillmore, David Isenberg and wife Tammy of Milburn, Arnold Isenberg of Milburn, Jerry Isenberg and wife Mary of Ravia and a host of nieces, nephews and friends. Graveside services to honor and celebrate the life of Tommy Isenberg will be held at 1:00 PM on Monday, January 4, 2020 at Condon Grove Cemetery in Milburn. Family hour will be held on Sunday, January 3 from 1:00 – 5:00 PM.

Tommy Clines Isenberg, 69, of Tishomingo, passed from this life on December 29, 2020 at Blue River Nursing Home in Tishomingo, Oklahoma. Tommy was born on August 3, 1951 in Durant, Oklahoma to C.W. and Ollie Harner-Isenberg. He grew up as one... View Obituary & Service Information

The family of Tommy Clines Isenberg created this Life Tributes page to make it easy to share your memories.

Tommy Clines Isenberg, 69, of Tishomingo, passed from this life...