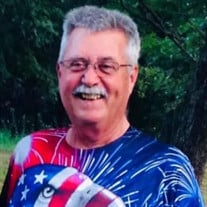 Tommy Joe Burns, 71 of Tishomingo, passed away on Thursday, September 9, 2021, in Ada, Oklahoma. He was born June 11, 1950 in Oklahoma City, OK to Ira J. (Joe) and Francis Burns. Tommy attended US Grant High School in Oklahoma City and later Murray State College in Tishomingo. Tommy proudly served our country in the United States Army in 1970 and was discharged in 1972. He was stationed at Fort Leonardwood Missouri and Fort Riley Kansas. Tommy spent 20 plus years as a Drilling Consultant before co-owning with his spouse their own dozer & construction business in Tishomingo. Tommy enjoyed spending time with his friends at the golf course and telling stories. He would love cookouts with his loving wife, stepsons, and step-granddaughter. He loved traveling to Alaska as often as possible to visit his daughter and grandsons. Tommy was preceded in death by his parents, Joe and Francis Burns; and son, Gregory Aaron Burns. Those he leaves to cherish his memories are his wife, Marvelia Burns of the home; daughter, Angela Baker and husband Ryan of Anchorage, AK and their sons Dylan Baker, Hayden Baker and Wyatt Baker; stepsons, Miguel Vecchio of Tishomingo, OK, Clayton Sullivan of Tishomingo, OK; and step-granddaughter Kathryn Vecchio; siblings, Donald Burns and Sandi Rushing both of Oklahoma City Funeral Services to honor the life of Tommy Burns will be held at 2:00 PM Tuesday, September 14, 2021 at DeArman-Clark Funeral Home Chapel. Interment to follow at Tishomingo Cemetery. Family hour will be from 5:00 – 7:00 PM at the funeral home. Those serving as pallbearers will be Larry Jack Hutchins, Benny Lewis, Luke Marshall, Kenneth Locke, Glen Copeland and Mike LaFevers. In lieu of flowers, the family requests that donations be made to Johnston County Reaching Out, P.O. Box 773, Tishomingo, OK 73460

The family of Tommy Joe Burns created this Life Tributes page to make it easy to share your memories.

Tommy Joe Burns, 71 of Tishomingo, passed away on Thursday, September...