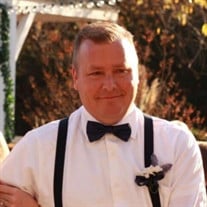 Timothy Lowe, son of Jimmy L. Lowe and Gayela Lowe Bick, passed away on April 12, 2021 at 10:54 PM in Ada, Oklahoma. He was born in Ada on August 13, 1976. Tim grew up in Wapanucka, Bromide and Jones, Oklahoma. Tim served his country for 20 years in the United States Coast Guard, recently retiring in September of 2017. He served duty stations starting in Louisiana, Puerto Rico, OKC (at a teaching unit), New York City, Texas, Alaska and back to Louisiana. He had duties as a hazardous materials specialist, dangerous explosives handling specialist and ultimately became an investigator for the United States Coast Guard. Tim was NYC Maritime Officer of the Year in 2008. He received many commendations (numerous to mention) from various places. His highest ranking that he received was Chief Warrant Officer, after starting as an E1 from boot camp. Tim attended Oklahoma Baptist University & was a proud member of the Choctaw Nation Tribe. He served as the President on the Wapanucka School Board. Tim was a prankster and loved to joke around and he was affectionally known by Allison and her friends as “Tammy”. He was a respectable, honest and kind hearted person who was a role model for so many kids as well as adult. Tim was preceded in death by his father, Jimmy Lowe; brother, Nathan Lowe. Those he leaves to cherish his memories are his mother, Gayela Lowe Bick; children, Dillon Lowe and wife Lyric, Gavin Lowe, Bryce Lowe and Parker Lowe; brothers, Jason Lowe and wife Carissa, Jamey Lowe and wife Christan; fiancé, Kristi Green and children, Allison Green and Shelby Eason; grandchildren, Chandler, Colette and Clementine (expected end of August); and a host of nieces, nephews and friends who will deeply miss him. A memorial service to honor and celebrate Tim’s life will be held on Saturday, April 17, 2021 at 2:00 PM at the Wapanucka School Gymnasium.

The family of Timothy Chad Lowe created this Life Tributes page to make it easy to share your memories.