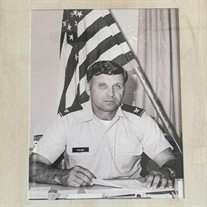 Thomas Junior Pickard of Stratford, Oklahoma was born August 21, 1935 in Muskogee, Oklahoma to William and Bessie Jane (Osborn) Pickard . He passed away in Ada, Oklahoma December 10, 2021 with his family by his side at the age of 86 years 3 months and 19 days. He grew up in Davis, Oklahoma where his mom and dad owned Picks Hot Tamales and graduated from Davis High with the class of 1954. He went to work at Bahner Funeral Home at the young age of 17. Under the direction of Cecil and Jane Bahner he found his life's calling. They helped him get started in the funeral business and he moved to Dallas where he went to the Dallas Institute of Funeral Directors and Embalmers. He joined the U.S. Army and worked for the funeral home. Moving to Stratford in the 1960s he bought what is now DeArman/Pickard funeral home, he ran 2 ambulances, until 1977, and then donated the ambulance to the town of Stratford. He married Vicki Morris on September 24, 1973 in Las Vegas, Nevada and they blended their family and worked together in the funeral business for the next 48 years, buying two more funeral homes. Tom was a member of the First Baptist Church, member of the Oklahoma State Funeral Directors, where he served on the state board for 30 years, Stratford Masons, and Stratford American Legion post 119. He served 36 years in the U.S. Army National Guard and Reserves. Eventually taking command of the 4003rd U.S. Army Garrison unit in Midwest City, retiring as a full Bird Colonel. He loved Stratford and was active in all aspects of this little community. He started the football program in 1967, served on the school board for 32 years while there bought the land for the football field and he and Delbert Knight bought all the metal for the light poles and welded them in Delbert's barn. Many other men helped in this project. They still stand today. During his time on the Stratford City Council he and Steve Phillips started writing for grants and got Governor David Hall to help get the 4 lane highway through Stratford. He was always a man of vision for the future. He was instrumental in getting the new high school, new auditorium, Senior Citizens, also he was Fire Chief for several years. Tom and his family rode with the Stratford Round Up club, serving as it's president several years. Tom loved to play golf, travel, and go snow skiing with his family and showing them how to ski without lessons while crashing into the ski rack. Do as I say, not as I do was his motto. Preceded by; his parents, one baby daughter Tara and step son Rodney Wood, son in law Gary Brown. Survived by: his wife Vicki Pickard of the home in Stratford children; Angie Brown of Oklahoma City, OK. Denise Clary & husband Kent of Lindsay, Oklahoma; Tomi Tice & husband Shannon of Stratford, OK. Todd Smith & wife Kristi of Coalgate, Ok. Grandchildren; Lindsey Moody, Zach & Val Clary, Kelsey & Kenny Eldridge, Emry & Endy Wood, Avry & Caitlin Wood, Morgan & Dayton Phillips, Reagan & Brandon Stokes, Katy Tice & Dale Rodgers, Brette Smith & Nick Southerlend, and Tanner Smith. 8 great-grandchildren and 2 on the way. Sister; Deloris Ulrich of Muskogee, OK. Pallbearers; Grandsons; Zach Clary, Kenny Eldridge, Avry Wood, Tanner Smith, Brandon Stokes and Dayton Phillips. Visitation will be Monday December 13, 2021 from 4 to 7 at DeArman Pickard Chapel Stratford, Oklahoma. Services' 1:00 PM Tuesday December 14, 2021 at the Stratford high School auditorium; Officiating Rev. Keith Stevens and Danny Hilliard. Interment will be in McGee cemetery Stratford, Oklahoma.

Thomas Junior Pickard of Stratford, Oklahoma was born August 21, 1935 in Muskogee, Oklahoma to William and Bessie Jane (Osborn) Pickard . He passed away in Ada, Oklahoma December 10, 2021 with his family by his side at the age of 86 years 3... View Obituary & Service Information

The family of Thomas J. Pickard created this Life Tributes page to make it easy to share your memories.