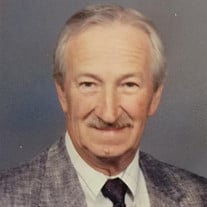 Thomas Andrew (Andy) Garrett was born to Talmadge T. and Maudie Carson Garrett on August 30, 1931. He passed away on April 22, 2022. Andy is survived by wife, Ina L. (Sandy) Garrett of Tishomingo, daughters Suzan F. Shoemake of Tishomingo, and Christine Vestal and husband Marc Vestal of Muskogee. Also, two grandsons, 4 granddaughters, eleven great-grandchildren, brother John W. Garrett and wife Crystal Garrett of McAlester, sister-in-law Marie Garrett, of Farmer’s Branch, Texas, and a large number of extended family and family friends. Close friends from the 1940s through the present are Wallace Robinson of Tucson Az, Fulton Nash of Tahlequah Ok, Bill Parker and Kenneth Hunter, both of Oklahoma City. He is preceded in death by his parents, Maudie Carson Garrett and Talmadge T. Garrett, his step-mother, Lovena Treat Garrett, brothers Murl W. and Joseph C. Garrett, sister Mary Alice Pierson, and son-in-law Steven G. Shoemake. Andy graduated from McAlester High School as a member of the class of 1949. He was a Boy Scout leader through that time, and joined the US Naval Reserve in 1949. He married Ina Lucinda Trapp (Sandy) in 1953 in McAlester Oklahoma. He was a talented and knowledgeable woodworker and worked for T.H. Rogers Lumber in McAlester and for Kilpatrick Brothers Lumber in Oklahoma City. In the late 1960s he began work for Wonder Bread bakery in Oklahoma City as a route man, and was promoted to ass’t supervisor and transferred to Sulphur Oklahoma, then to Muskogee Oklahoma as Branch Supervisor. At various times, he delivered newspapers, from the Grit weekly, the daily McAlester NewsCapitol to the Daily Oklahoman. In 1976 Andy and Sandy bought Andy’s Happy Hamburgers in Muskogee. They sold AHH in 1994 and retired to Tishomingo Oklahoma. After dedicating his life to Jesus at age 16, he began his life long service to the church. He taught Sunday School, served as youth leader, assistant Sunday School Superintendent and then as Sunday School Superintendent, which position he held at multiple churches for about 40 years. He also served as church sec-treasurer, deacon, usher, general custodial work, building repair, cabinet builder and handyman. He performed any task or mission to support his pastor and his church. He had a heart for Christian education at every level and always wanted to contribute his time, money and effort to serve God. He loved to travel and visited all but 5 United States. When his USNR duties sent him to sea, he visited Cuba (before Castro), as well as Haiti. He continued his training in any aspect possible, including Navy, for Sunday School improvement for children and young people, and for improving his leadership at church and at work. He loved sports of all kinds, and coached and played various sports through his entire life. He also loved gospel music. He found joy, comfort and inspiration in the old gospel songs through the last minutes of his life. Funeral services to honor and celebrate the life of Thomas Andrew Garrett "Andy" will be held at 10:00 AM Thursday, April 28, 2022 at the First Assembly of God in Tishomingo. Interment to follow at Condon Grove Cemetery in Milburn. Family hour will be on Wednesday, April 27 from 4:00 - 6:00 PM at DeArman-Clark Funeral Home.

The family of Thomas Andrew Garrett "Andy" created this Life Tributes page to make it easy to share your memories.