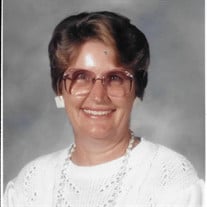 Theresa “Hap” Mae Marsolf passed away August 4, 2020 after a lengthy battle with Alzheimers in Ardmore, OK. She was 80 years young. Theresa was the daughter of Clarence “Pete” and Aline Larman of Byars, OK. She was born on September 7, 1939 in rural Byars. She was the oldest granddaughter of Basil and Eva Larman and the oldest granddaughter of Griff and Eula Harmon. She spent many hours with her Uncle Vernie (the youngest of the Larman clan) learning to love animals—a love that she never lost. Her Uncle Vernie lost his life in the Korean Conflict—she had so many fond memories of their time together—in many ways, he was her “older brother”. Vernie gave her the nickname of “Happy Jack” as she was always smiling and laughing. It was shortened to “Happy.” With the arrival of her baby brother, Gary, it was shortened to “Hap” when he started talking. She attended Asher Public School and graduated from there in 1957 as the class valedictorian. She attended East Central University where she met her first husband, Deion Bleer. They were married in 1958 and had two children, Sandra Dawn (Bleer) Lackey and Randall Dwayne Bleer. She graduated from East Central University with a B.S. in Elementary Education. She taught school at Asher Elementary School from 1972 until her retirement. She touched the lives of many young people over this time. She also met her best friend while teaching at Asher, Arlene Cameron Wyche. They took painting classes together where Theresa honed her skills. Family and friends have her beautiful paintings hanging in their homes. In 1975, she married Merle Marsolf and they bought the “original Larman” farm. Upon her retirement from teaching, Theresa started working at Braums in Pauls Valley, OK. She loved being able to farm--from gathering her many dozens of eggs, caring for her horses and cattle, to taking in stray animals, she was more content there than at any other career. Theresa became the primary caregiver for her parents when their health started to fail. In 2001, she lost her dad, Pete Larman, to Alzheimers, and in 2009, she lost her mother, Aline Larman. Her husband, Merle died in 2014. She went to live with her daughter, Sandy and her husband, Paul, at Ardmore. In 2013, Theresa and her beloved dog, Shorty, moved to an assisted living center as her Alzheimers was progressing to the point that she needed more care. Sandy continued to visit her and care for her as much as possible. For her 78th birthday, Sandy had a huge family birthday party for Theresa with her family and cousins present. It was a memorable event. Her cousin, Sharon McElroy, presented her with a prayer blanket blessed with love by all those present on that day. Theresa loved her family. She was always creating something special for them. Her artistic talents knew no boundaries—from paintings to woodwork, we all have something to remember her smiling face. Even in the days when Alzheimers was doing its best to remove her from us, she had a smile for those around her. Theresa leaves her daughter, Sandy and husband, Paul Lackey of Ardmore, OK, her son Randy and wife, Sherry Bleer of Velma, OK. Grandchildren: Tess Lackey of Highlands Ranch, CO; Katie Lackey of Ardmore, OK; Keli Edsall Laminack and husband Corey of Sanora, CA; Luke Bleer and wife Krista of Elmore City, OK; Chara Humphrey and husband Johnny of El Reno, OK; and Breanna Hibler of Duncan, OK. She leaves seven great-grandchildren. She also leaves her brother, Gary Larman and wife Wray of Coyle, OK, her niece, Audrey Harmon and husband, Burton of Morrison, OK; children Benjamin, Aaron, Jared, Kaylee and Alberto, her nephew, Monty Larman and wife, Julie of Orlando, OK; children Ashlyn and Casyn, and her paternal Uncle Maurice “Cotton” Larman of Dodge City, KS. She leaves several beloved cousins and their families in addition to friends she made over the years. Visitation; Thursday evening August 6, 2020 from 5:00 PM to 7:00 PM at DeArman/Pickard Funeral Home. Stratford, OK. Graveside Services; 10:00 AM Friday August 7, 2020 in Byars Cemetery, Byars, OK.

The family of Theresa Mae Marsolf created this Life Tributes page to make it easy to share your memories.