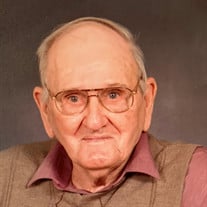 Terrell Zane Dunn passed away on September 27, 2019 at the age of 96. He was born on May 11, 1923 to Sam and Bertie Dunn in Wynnewood, Oklahoma. He grew up in the area with his brother Clinton and sister Pauline. Terrell was married to Dorothy Underwood on May 27, 1944. They were very proud of being married for 75 years. He served in the Army from 1945 to 1946. He was very active in the Wynnewood Round-Up Club in the 1960s. He was employed with Sun Oil Company in Wynnewood. He also raised cattle for as long as he was able. He was a hard worker, maintaining his home and ranch lands until 14 years ago when he lost a leg and was confined to a wheel chair. He saw no use in complaining and adjusted his life to fit his abilities. Gradually he began to pick up cooking skills, which served him well, as he was chief cook at home the last few years of his life. He was especially proud of cooking his special breakfast every morning for them and their son Jim. Terrell was a faithful member of the First United Methodist Church in Wynnewood. In the past few years Sunday’s became a special day to spend time with grandson, Craig, first going to church then out to lunch. He cherished visits with grandchildren and their families. He was blessed with many good friends and neighbors who looked for ways to help him and Dorothy. He had a wonderful sense of humor and will be greatly missed by his family and friends. He is survived by wife, Dorothy; children, Jim Dunn and wife Linda, Connie and husband Jim; grandchildren, Cindy Dierks, Carol Clock Goetz, Craig Dunn, Brent Dunn, Brooke Stewart, Tana Hardy; 10 great grandchildren and a host of other family and friends. The funeral will be held on Tuesday, October 1, 2019 at 2:00 PM at the Wynnewood First United Methodist Church. Interment to follow at Oaklawn Cemetery in Wynnewood. Officiating the service will be Rev. Kip Healtey and Rev. Paul Hamilton. Serving as pallbearers will be Bodie Armstrong, Tracy Dunn, Donny Smith, Josh Smith, Craig Dunn, Brett Dunn. Honorary pallbearers will be Cletus Dixon, Roger Gardner, Richard Robertson and David Ray Robertson. The family asks in lieu of flowers that a donation be made in Terrell’s name to the First United Methodist Church in Wynnewood.

Terrell Zane Dunn passed away on September 27, 2019 at the age of 96. He was born on May 11, 1923 to Sam and Bertie Dunn in Wynnewood, Oklahoma. He grew up in the area with his brother Clinton and sister Pauline. Terrell was married to Dorothy... View Obituary & Service Information

The family of Terrell Zane Dunn created this Life Tributes page to make it easy to share your memories.