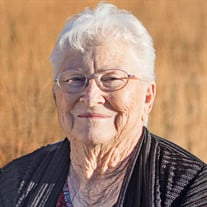 Simone Gale Boyd or "Mom Mom" as she was lovingly called, of Fillmore, Oklahoma passed from this life on February 26th, 2022 in her home at the age of 80 years old. She was born on June 5th, 1941 to John and Kathryne Hertel in Knoxville, Texas. Simone grew up in Benjamin, Texas, before moving to Fillmore and attending Milburn High School, where she graduated in 1959. Following graduation she worked in a sewing factory in Madill, OK. In March 1962 she met the love of her life, Bill Boyd. Bill knew Simone was special and told her on their first date that they will get married someday. On the 2nd date, Bill asked Simone to marry him, and she said yes. They were married weeks later on June 30, 1962 and would have been married 60 years this year. To say they loved each other was an understatement. They completed each other. For his onery and loud self, she was sweet and caring, and when he took things too far, she always brought him back down with her shrill yell of “Bill!!!” The two enjoyed traveling and camping together, and fishing was their down time of choice. Simone was obsessed with Scooby Doo and had a full collection of memorabilia. She enjoyed reading; romance novels and Harry Potter were her favorites. We believe she was a Hufflepuff from her loyalty to family, but the sorting hat has neither confirmed nor denied this. She also loved doing puzzles and could often be seen with a huge puzzle laid out on the table, completing it with family. This was fitting as Simone really was the puzzle piece that brought the family together, as she was a wonderful mother, grandmother, homemaker and wife. She could always be counted on to say, “Love you, sugar.” She loved Jesus and showed that love every day. Simone is preceded in death by her parents, John and Ella Kathryne Hertel; her brother, Johnny Paul Hertel, and sister-in-law Retha Hertel. She is survived by her soulmate, Bill Boyd; four daughters Lisa and husband Gary Whitmire, Leelie and husband Greg Hughes, Lynna and husband Clint Freeman, and Larissa Pittman; 8 grandchildren, Amber, John, Liegha, Casie, Landon, Lynne'a, Hayden, and Ciera; 16 great-grandchildren. As you can tell L names were a favorite in this family, and at family events Simone could often be heard trying to figure out which L she needed to tell at. She is also survived by brother, Kirby Hertel, sisters, Sonja Hamilton and husband Dan, Romona Hoskins and husband Johnny. A celebration of life will occur at 10:00 AM Friday, March 4, 2022, at Fillmore Church of the Nazarene in Fillmore, Oklahoma, with interment to follow at Fillmore Cemetery. Family hour will be Thursday March 3rd from 6:00 – 8:00 PM at DeArman-Clark Funeral Home in Tishomingo. Every year at the Reaching Out Fish Fry fundraiser Simone could be seen volunteering to help cook or serve and the family would like to carry on that legacy by asking everyone to make a donation in her name to the Reaching Out program in Tishomingo in lieu of flowers. Arrangements have been made under the direction of DeArman-Clark Funeral Home in Tishomingo. Online condolences may be sent to the family at www.dearmanfuneralhome.com

Simone Gale Boyd or "Mom Mom" as she was lovingly called, of Fillmore, Oklahoma passed from this life on February 26th, 2022 in her home at the age of 80 years old. She was born on June 5th, 1941 to John and Kathryne Hertel in Knoxville, Texas.... View Obituary & Service Information

The family of Simone Gale Boyd created this Life Tributes page to make it easy to share your memories.

Simone Gale Boyd or &quot;Mom Mom&quot; as she was lovingly called, of...