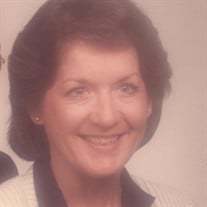 Sandra Louise McNiel, 77, of Mill Creek, Oklahoma went home to be with the Lord on March 21, 2021. She was born to Cecil and Zona Cagle on 2/11/44 in Wynnewood, OK, grew up south of Sulphur and graduated from Sulphur High School in 1962. She later married Fred Kemper and they had two children, Kevin and Dina. She lived in several different states as Fred was in the Air Force. After returning to Oklahoma in 1980, she continued her computer career eventually working her way up to Senior Systems Analyst before retiring. Sandra enjoyed fishing and travelling with her second husband, Bob. She also liked to cook, read, garden, spend time with her grandchildren, listen to music and play the piano. She loved her Lord and served at Central Baptist Church in various roles such as pianist, treasurer, and helping in Vacation Bible School. She is survived by her son, Kevin Kemper and wife, Robin of Guthrie; daugher, Dina Paxton and husband Keith of Lawton; grandson, Nathan Kemper of Mauldin, SC; grandson, Jeremy Kemper and wife, Hannah of Choctaw; grandaughter Grace Farnan and husband, Shannon of Pauls Valley; grandson, Seth Kemper of Davis and four great-grandchildren, Lane, John, Riley and Reid. She is also survived by her sister, Janis Warren and husband, Randy of Mill Creek and nephews, nieces, great-nephews, and great-nieces. She is preceded in death by her parents, Cecil and Zona Cagle; husband, Bob McNiel; and brother, John Cagle. Funeral services will be at Central Baptist Church (south of Sulphur) at 10:00 am on Friday, March 26, 2021 with the Reverend Eddie Dye officiating and the burial will follow at Oaklawn Cemetery under the direction of DeArman Funeral Home. Pallbearers will be Nathan Kemper, Jeremy Kemper, Seth Kemper, Shannon Farnan, John Cagle, Jr. and Ben Warren. If you would like to make a memorial donation, the family appreciates your consideration of the Alzheimer's Association.

Sandra Louise McNiel, 77, of Mill Creek, Oklahoma went home to be with the Lord on March 21, 2021. She was born to Cecil and Zona Cagle on 2/11/44 in Wynnewood, OK, grew up south of Sulphur and graduated from Sulphur High School in 1962. She... View Obituary & Service Information

The family of Sandra Louise McNiel created this Life Tributes page to make it easy to share your memories.