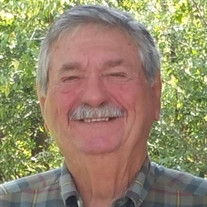 Sammy Joe Lyle, of Wynnewood, was born August 20, 1947 in Waurika, Oklahoma to Cecil and Dorothy Carroll Lyle and passed from this life on April 27, 2020 in Oklahoma City. Sammy grew up in Orr, Oklahoma and attended school there through the eighth grade. He then attended high school at Ringling, Oklahoma where he graduated in 1965. On November 22, 1966, he married Judy Ann Southerland of Loco, Oklahoma in Wichita Falls, Texas. The couple made their home in the Ringling area and welcomed daughter Lesa in 1967 and son Ricky in 1970 while Sammy worked in the oilfields of southern Oklahoma. In 1972, Sammy went to work for Lone Star Gas Company. He worked first as a compression station technician in Gainesville, TX, then in pipeline operations in Wichita Falls, TX. In 1978, he was able to transfer to the office at Fox, OK where he was able to work with his father until his retirement. The family made their home at Healdton where both children where raised and graduated high school. In 1992, the company was sold to Oklahoma Natural Gas. At that time, Sammy and Judy moved to Wynnewood and Sammy worked for ONG as transportation superintendant until his retirement in 1998. Sammy gave his life to the lord and was baptized on November 15, 1998 at Christ Tabernacle Church in Marietta, OK, where the family attended church for the next 18 years. Even through dire health, Sammy trusted in the Lord and received a miraculous life-saving heart transplant on March 7, 2000. Even after the transplant, he continued to take dialysis until his daughter gave him a kidney on April 27, 2009. In 2014, the family began attending church and became members of Wynnewood First Baptist Church. Sammy never missed a Dallas Cowboys football game. He loved to play music, growing up in a family of musicians, and spent many years playing music in dancehalls in Oklahoma before coming to Christ and playing in the church. Above all, the highlight of Sammy’s life was his family. He loved his wife, children, and grandchildren unconditionally. Sammy is preceded in death by his parents, Cecil and Dorothy Lyle. He is survived by wife Judy of the home, sister Karen and husband Mike Hereford of Greenville, OK, sister Tracy Ann Lyle-Roberts of Orr OK, daughter Lesa and husband Justin Sutton of Ada, OK, son Ricky Lyle and wife Pepper of Wynnewood. Grandchildren: Taylor Norton of Ada, OK, Derrick Moore and wife Dianne, Emily Lyle, and Aaron Lyle, all of Wynnewood, Montana Sutton and wife Kirsten of Ada, OK, Whitley Pharr and husband Jared of Stonewall,OK, and Rodi Sutton of Ada, OK. The family would sincerely like to thank the staff, doctors, and especially the nurses of Integris Hospital in Oklahoma City who were like family the last few weeks of Sammy’s life. Graveside services will be held at Oaklawn Cemetery in Wynnewood on Thursday, April 30, 2020 at 2:00 PM under the direction of DeArman’s Funeral home and officiated by Brother Jared Kendall of Wynnewood First Baptist Church. Services will be live streamed on DeArman’s Facebook page.

Sammy Joe Lyle, of Wynnewood, was born August 20, 1947 in Waurika, Oklahoma to Cecil and Dorothy Carroll Lyle and passed from this life on April 27, 2020 in Oklahoma City. Sammy grew up in Orr, Oklahoma and attended school there through the... View Obituary & Service Information

The family of Sammy Joe Lyle created this Life Tributes page to make it easy to share your memories.