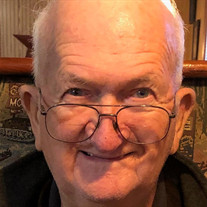 In the early morning hours of Thursday, January 23, 2020, S.R. Robinson, entered peacefully into heaven by the grace and love of his lord and savior, Jesus Christ. He immediately embraced his wife, Geraldine that he had longed to see since her passing in May of 2010. S.R. was born on January 21, 1930 in Mannsville, Oklahoma to Samuel and Linnie Wolf Robinson. He was the youngest of ten children. S.R. married Geraldine Hinkle on January 15, 1959 in Tishomingo. S.R. graduated from Tishomingo High School and attended college at Murray State College. As a young man, he traveled to California looking for adventure and a job. He joined the United States Army and served in Paris, France. S.R. worked in construction and pipe-line work in the late 1950s and early 1960s. He and Geraldine then moved back to Tishomingo where he began working for his brothers at Chuck’s Grocery as a butcher. S.R. became the owner of this Tishomingo landmark business in October, 1979. He was known for his great meat market and providing friendly service to his many customers who often thought of him as family. S.R. loved playing a round of golf when given the opportunity and achieved a hole-in-one four times and many “closest to the pin” shots with his friends during their weekly scrambles. He enjoyed playing dominoes and was self-proclaimed to hold his PhD in the game. S.R. was a kind man with an everlasting smile and a love of laughter. His generosity flowed to others and he was always willing to help people in need. His life became new when he received the Gift of Salvation in January,1957 and became a member of the Church of the Nazarene. He seldom spoke of his life “before the church,” at least to his kids but welcomed opportunities to speak of the change he experienced when he met Jesus. His love for his Savior, his family and his friends will be greatly cherished and missed. S.R. was surrounded by his family in celebration of his 90th birthday Sunday prior to his homegoing. It was a day of love, laughter, and family just as S.R. was most happy. S.R. was preceded in death by his beloved wife of 51 years Geraldine, his parents, Samuel and Linnie Robinson, his brothers, Opal, Arvol, Woodrow “Chuck”, Doyle, and Kenneth, his sisters Oleta, Juanita, Margarette, and Barzella, and son-in-law Mike Sorrels. He is survived by his five children, Gary and wife Frankie, Terry and wife Angela, Sheri Marsh and husband Willy, Shana Sorrels, and Ron and wife Candi. He left a tremendous legacy with fifteen grandchildren, Lindsey, Aaron, Ryleigh, Matt, Tanner, Michael, Mitchel, Madison, Owen, Alex, Abbey, Charli, Scout, Gage, and Sami Raye “Little SR” and five great grandchildren, Kannon, Kase, Kord, Lennon, and Wells. Funeral Services to honor and celebrate the life of S.R. Robinson will be held at 2:00 P.M. Tuesday, January 28, 2020 at the Church of the Nazarene in Tishomingo, Oklahoma. Interment to follow at Tishomingo Cemetery. Family hour will be Monday from 6:00 - 8:00 at DeArman-Clark Funeral Home.

In the early morning hours of Thursday, January 23, 2020, S.R. Robinson, entered peacefully into heaven by the grace and love of his lord and savior, Jesus Christ. He immediately embraced his wife, Geraldine that he had longed to see since... View Obituary & Service Information

The family of S.R. Robinson created this Life Tributes page to make it easy to share your memories.