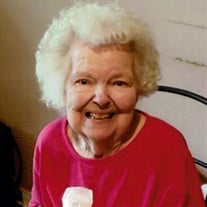 Ruby Ella Dillard August 2, 1927 – September 1, 2019 Longtime Wynnewood resident Ruby Ella (Howard) Dillard, passed away at her home on September 1, 2019, at the age of 92. She was born to John Abrum Howard and Ludia Clarissa (Woodall) Howard, in Roosevelt, OK, on August 2, 1927. Ruby Ella grew up on a farm near Katie, OK, and moved to the current family farm east of Wynnewood, when she was in high school. She graduated Salutatorian of her WHS class in 1946. During her senior year, she met Thomas Dillard, a handsome soldier returning from war. They married September 13, 1947. Ruby Ella and Thomas had three daughters; Luanne in 1952, Lawana in 1954, and Linda in 1956. When the girls were in middle school, Ruby Ella decided to pursue a college education. She completed her bachelor’s and master’s degrees at East Central University, Ada, and began teaching in the Wynnewood Public Schools. She eventually became a school counselor and taught math, science, and special education classes. Ruby Ella loved teaching and was always thrilled when one of her former students would see her around town and say hello. Ruby Ella was preceded in death by her parents, her husband Thomas, and her oldest daughter Luanne. She is survived by two of her daughters, Lawana Dillard and Linda Dillner, both of Norman; her favorite son-in-law Wayne Dillner, Norman; four granddaughters, Lindsay Kula (Jordan Champion), Norman; Lauren Kula Wheeler (Trey Wheeler), Bremerton, WA; Madeline Dillner, Norman; and Emily Dillner, Mountain Home, AR; as well as four great-grandchildren, Clarissa and Kennedy Champion, Norman; and Elaine and Cale Wheeler, Bremerton, WA. She is also survived by good friends and neighbors, Kathy and Randy Hodge, whom she loved like family. Special love and appreciation is also given for her dear friend, Tammy Goforth. Services will be held at 11am, Monday, September 9, at the Wynnewood First United Methodist Church, 204 South Robberson. Visitation will be Saturday September 7, 2019 at DeArman Funeral Home from Noon to 6PM. Burial will follow at Oaklawn Cemetery in Wynnewood. Arrangements are under the direction of DeArman Funeral Home in Wynnewood. Ruby Ella leaves behind Luanne’s dog, Jack, and her kitties Bootsie, Lucky, and Little One in the care of family and friends. In lieu of flowers and in memory of Ruby Ella’s love for animals, please send a donation to Second Chance Animal Sanctuary, Inc., P.O. Box 1266, Norman, OK, 73070.

The family of Ruby Ella Dillard created this Life Tributes page to make it easy to share your memories.