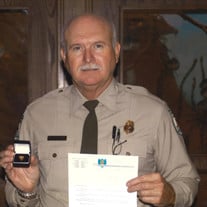 Roy Dean Roundtree, 70, of Sulphur, passed away on 26 February, 2022. Funeral services will be held at St Francis Xavier Roman Catholic Church in Sulphur at 1:00 PM on Tuesday March 8, 2022, followed directly by burial at Drake Nebo Cemetery. Roy was born in Sulphur on October 22, 1951. He was a craftsman, blacksmith, outdoorsman, vintner, luthier, musician, veteran, family historian, and avid self-educator. A graduate of Mill Creek High School, Roy attended courses East Central University, gained a Certificate in Biblical Studies at a Bible College in Florida and served as a pastor of a church in New Mexico, later receiving the Education for Ministry certificate from the University of the South in Sewanee, TN. With a brief stint as a scuba diver in his youth, and after receiving an honorable discharge from the US Army, Roy gave most of his life to law enforcement in Oklahoma. He was an officer with the police department in Ardmore, and later assigned with OHP, Lake Patrol Division, at Lake Thunderbird. After 25 years of active duty, Roy retired from the State of Oklahoma’s Department of Wildlife Conservation as a Game Warden first in Sequoyah County and then Murray County. Roy then went on to serve as the 911 Center’s Coordinator in Murray County for four years and was instrumental in its consolidation as the public safety answering point for the county in 2010. He gave many volunteer hours to the American Legion Post 148 in Sulphur. He was preceded in death by his father, Jimy Roundtree, who was killed in action in Korea, 1952. He was a cherished member of a large extended family, full of aunts, uncles and cousins; a much loved father-figure and ‘Papa’ to many. He is survived by his wife of 28 years Kathy, his mother Alene, his children Clay, Monica, Joseph, Calvin; his daughters-in-law Frances and Michell, and son-in-law Shawn; his grandchildren Crispin, Jude, Isaac, Ryan and Amy; as well as his brothers Monty and Brian and sisters-in-law Dixie and Annette. Da pacem Domine: give peace O Lord. In lieu of flowers the family request donations to be made to the Drake Cemetery through Vision Bank in Sulphur or to the Oklahoma Department of Wildlife

The family of Roy Dean Roundtree created this Life Tributes page to make it easy to share your memories.