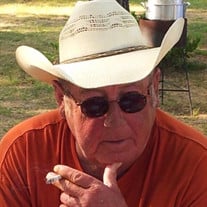 Funeral Services to honor and celebrate the life of Roger Dale Wallace will be held at 10:00 A.M. Tuesday, June 4, 2019 at DeArman-Clark Funeral Home Chapel. Interment to follow at Condon Grove Cemetery. Family hour will be held from 6-8 P.M. Monday, June 3. Roger Wallace was born September 23, 1950 in Tishomingo, OK to Virgil and Tressie (Howell) Wallace. He departed from this life on May 31, 2019 at his home in Milburn at the age of 68 surrounded by his wife and family who he loved dearly. Roger grew up in Connerville, OK where he attended school until his high school years when he transferred to Tishomingo where he met Janice Wood. As a kid Roger enjoyed horses and driving anything that would smoke the tires. Roger and Janice were married August 29, 1969. While building their life together they had four children, Sonya, Raye Lyn, Cindy and Bobby. Roger spent his work career as a rig welder and traveled all over where he made life long friends over the road. Everyone that knew him had a great memory he left with that might not be appropriate to tell in a crowd. He was quite the prankster. The most important things in Roger’s life was his family, especially his four children and eight grandchildren. Roger spent his life helping others. He had a generous heart under his gruff exterior and it showed in the countless benefits he put on over the years for neighbors and friends in need. Each brisket he cooked he put his heart into and people came from all over to eat at his table and visit on his front porch. That porch holds many memories. Roger is survived by his wife of almost 50 years, Janice Wood Wallace who stood by his side always and took care of him until his last day; four children, Sonya Diggs and husband Mike of Durant, Raye Lyn Cole and husband Ronald of Tishomingo, Cindy Adair and husband Jerry of Milburn, Bobby Wallace and wife Jaime of Ardmore; his eight grandchildren that were his greatest joys, Heather DeBusk, Cheyenne Diggs, Callie Diggs, Cole Sliger, Tucker Barnes, Tanner Barnes, Cara Wallace, Cory Wallace; three sisters, Gertrude Faye Brown, Sharon Wallace, Margaret Wallace; sister in law, Barbara Wallace; numerous nieces, nephews and other relatives and wonderful friends. Roger is preceded in death by his parents, Virgil and Tressie Wallace; three brothers, H.O. Wallace, Ausbin Wallace, Glyn Wallace. He will be missed by all that knew him.

Funeral Services to honor and celebrate the life of Roger Dale Wallace will be held at 10:00 A.M. Tuesday, June 4, 2019 at DeArman-Clark Funeral Home Chapel. Interment to follow at Condon Grove Cemetery. Family hour will be held from 6-8 P.M.... View Obituary & Service Information

The family of Roger Dale Wallace created this Life Tributes page to make it easy to share your memories.

Funeral Services to honor and celebrate the life of Roger Dale...