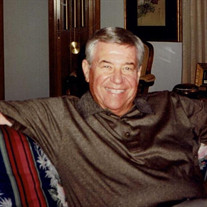 Roger Burwell Musgrove, of Wynnewood, was born on Christmas Day, December 25, 1934 in the town of Wright City, Oklahoma and passed away at home on August 21, 2020. Roger’s early years were spent in Wright City and Ardmore until he moved to Wynnewood as a 5th grader in 1946. He was a graduate of Wynnewood High School in 1953 and started attending college at Oklahoma A & M. During his time at Oklahoma A & M, he married his sweetheart Venita Jo Hays on January 25, 1956 and then completed his senior year at Oklahoma A & M and graduated in 1957 with a Bachelor’s Degree in Business. Upon completion of his degree he and Jo returned to Wynnewood to join his parents in the family business, Musgrove Lumber and Hardware. He worked there along side of his parents and sons until his retirement at the age of 83 in 2018. Roger was active in the community and was a member of many organizations. Some of those included the Wynnewood Chamber of Commerce, Kiwanis Club, Wynnewood Quarterback Club and the Wynnewood Fire Department where he served 25 years and held various offices including Fire Chief. He also served for a time on the Board of Directors at the State Bank of Wynnewood. He and his family were members of the First Baptist Church where he served as a Deacon for a number of years. Roger was preceded in death by his parents, L.W. (Buddy) Musgrove and Evelyn Burwell Musgrove and his sister Lonette Musgrove Nelson. He is survived by his wife, Venita Jo Hays Musgrove of Wynnewood, his four sons Steve and wife Lee Ann Musgrove of Wynnewood, Stan and Patty Musgrove of Wynnewood, Shawn and wife Cathy Musgrove of Norman and Stacy and wife Lisa Musgrove of Purcell. Also, his loving Grandchildren Holly and husband Dusty, Jared and wife Jenny, Jenna and husband Derek, Nick and wife Casey, Mark and wife Missy, Sara and husband Colby, Katelyn, Carrie and husband Doug, Angie and husband David and Tyler. Great-Grandchildren, Madison, Phoenix, Emma, Jordan, Ellie, Joshua, Kole, Clover, McKenzie, Maci, Landon, Drew, Reed and Cooper. Roger had many friends and enjoyed being around people. He loved the time he got to spend around Jo, his children, his grandchildren and his great grandchildren especially during the Christmas Holidays. Services will be held at the Wynnewood First Baptist Church on Monday August 24, 2020 at 2:00 PM with Dr. Jared Musgrove officiating. Burial will follow at Oaklawn Cemetery in Wynnewood. Services are under the direction of DeArman Funeral Home in Wynnewood. Please send online condolences to www.dearmanfuneralhome.com

Roger Burwell Musgrove, of Wynnewood, was born on Christmas Day, December 25, 1934 in the town of Wright City, Oklahoma and passed away at home on August 21, 2020. Roger&#8217;s early years were spent in Wright City and Ardmore until he moved... View Obituary & Service Information

The family of Roger Musgrove created this Life Tributes page to make it easy to share your memories.

Roger Burwell Musgrove, of Wynnewood, was born on Christmas Day,...