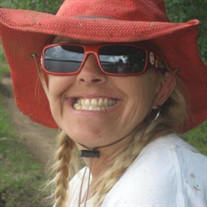 Robin Camille McCaleb, devoted mom and Nene, of Maysville, Oklahoma, passed away on November 17, 2021, at the age of 63 with her family by her side. She was born on October 30, 1958, in Pauls Valley, Oklahoma, to Braunell Farrell and Mary (DeArman) Hunter. Robin was blessed with three younger brothers, Buz, Wendell, and Todd Farrell. As a little girl, her daddy worked for Humpty Dumpty and they were transferred from Maysville to Lawton, Oklahoma, where she started grade school. The family moved back to Maysville in her fifth-grade year. Her momma and daddy built a house that was not only her childhood home but, the one she lived in for the past thirty years. Her senior year, she transferred to Paoli Schools where she would go on to graduate in 1976. During her high school years, she played basketball and was a waitress at Big John’s working alongside the boss, which was also her granny, Sylvia Farrell. Much of her life was spent chasing and coaching her girls and granddaughters on the softball fields. Everyone knew she had the “mom bag” which contained the necessary essentials, even if, a few of them were out of date. Brylee and Kennedy loved Nene being at their games because they knew she would treat them with all the sweets they wanted. Robin had numerous hobbies but one of her all-time favorites was fishing. She would wake her girls up in the middle of the night because it was sprinkling just a little and that was the “perfect fishing weather to catch the big ones”. She had more poles and tackle than anyone else in Garvin County. Another favorite hobby of Robin’s was four-wheeling and anything that involved getting muddy. Somehow, she was always able to find the deepest hole which resulted in her saying “well, I’m stuck, somebody come get me.” She loved playing in the dirt, too. Gardening and her flower beds are where you would find her early in the mornings before it got “too hot” out. Another passion of hers that didn't involve getting dirty was reading. She always had a book in her hand and could read a book in one day. She loved watching OU football. One of her favorite phrases was “Go Baby, Go Baby, GO!” It was a necessity to have an OU shirt on for game days and she believed OU game days were for watching OU play and nothing else. She worked as a paralegal for Dan Sprouse in Pauls Valley, Oklahoma for 20 years. She is preceded in death by her daddy, Braunell Farrell. She is survived by her two daughters, Kassandra and husband Kent Turner, and Callie Pigg, both of Lindsay, Oklahoma. Her five grandchildren, Jet, Rayce, Brylee, Kennedy, and Heston. Her mother Mary (DeArman) Hunter of Maysville, Oklahoma. Three brothers, Buz and Karen Farrell of Pauls Valley, Oklahoma, Donny and Cheryl Farrell of Washington, Oklahoma, Todd and Sherrie Farrell of Jay, Oklahoma. And a host of nieces, nephews, great-nieces, and great-nephews. A Celebration of Life will be held for her on Wednesday, December 1, 2021, at First Baptist Church Activity Center at 2 p.m Maysville, Oklahoma. Flowers can be purchased from Sunshine Flower Shop in Maysville, Oklahoma on their website https://www.sunshineflowershop.net/ or by calling 405-867-1236. Donations to Robin's grandbabies education fund can be sent to https://gofund.me/4f63ff31.

Robin Camille McCaleb, devoted mom and Nene, of Maysville, Oklahoma, passed away on November 17, 2021, at the age of 63 with her family by her side. She was born on October 30, 1958, in Pauls Valley, Oklahoma, to Braunell Farrell and Mary (DeArman)... View Obituary & Service Information

The family of Robin Camille McCaleb created this Life Tributes page to make it easy to share your memories.