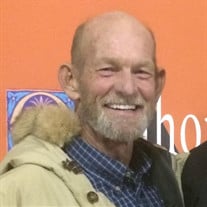 A memorial service to honor and celebrate the life of Robert Wayne Johnson will be held at 2:00 PM Friday, October 11, 2019 at the First Baptist Church in Tishomingo, OK. Robert Wayne Johnson, to many known as “Bob” was born on January 2, 1955 in Ada, OK. Alongside his parents, George and Ramona Johnson, Bob and his brother Mike lived an idealistic life on various fish hatcheries in several states across the U.S. definitely a life fitting an energetic curious boy like Bob. One of his fondest memories was raking moss from the hatchery ponds with his head barely above the water’s edge and selling the workers the donuts that Ramona had prepared for them. Bob was an amazing athlete during his life. Whether it was football, baseball, or pole vaulting in his yard he was constantly busy. His biggest fans were his family and they never missed a game. Sports were so much part of his life that even his faithful dog, Wolf, was spotted early one morning tossing the baseball in the air then running the home-made bases outside their kitchen window. Bob graduated from high school in San Marcos, TX in 1973. A new student in a new place his senior year wasn’t an easy thing for Bob. But many funny stories came out of that hard year and some great friendships. And we all know Bob never missed sharing a funny story. We loved them all. Bob continued his education at Southwest Texas State University. He belonged to the Sigma Nu Fraternity. In the early 1980’s, his parents returned to their Tishomingo roots after retiring. Bob followed a short time later. He began his oil field career on Hoot Stallings’ Casing Crew. He worked many oilfield jobs and in many places during his 35-year career. He worked as close as Azle, TX and as far away as an offshore rig in the Bay of Campeche, Mexico. He worked many positions but his favorite being Derrick hand. His last position was in the mountains of Pennsylvania as a Drilling Superintendent. Bob was such an amazing man. But his greatest achievement was his role as husband and father. He so unselfishly shared every possible moment he could with his family. He found ways to make the distance between us not so far when he was working by making his time at home so special. Not only for our family but for other great kids who needed a place to be loved. We had such a great life with such a great man. His gift to us was more than 22 years of happiness even though forever would only be long enough. Thankfully, God has gifted that opportunity as well. Everywhere Bob moved as a child, or worked as an adult he never did miss opportunities to spread laughter and make many life-long friends. He will be desperately missed by many. Bob is preceded in death by his parents, George and Ramona Johnson; brother, Mike Johnson; father in law, T.L. Qualls. Those he leaves to cherish his memories are his wife, Mary Johnson; children, Landon Johnson and wife Elise, Jaren Callen and wife Brandy, Sarah Harbin and husband Kyle, Echo Callen; grandchildren, Ashlynn Callen, Eli Oliger, Cooper Callen, Blain Harbin, Stetson Harbin, Ivy Harbin, Jaylea Callen, Jatelyn Callen, Jycen Callen; mother in law, Pearl Qualls and a host of other family and friends who will deeply miss him.

A memorial service to honor and celebrate the life of Robert Wayne Johnson will be held at 2:00 PM Friday, October 11, 2019 at the First Baptist Church in Tishomingo, OK. Robert Wayne Johnson, to many known as &#8220;Bob&#8221; was born on... View Obituary & Service Information

The family of Robert Wayne Johnson created this Life Tributes page to make it easy to share your memories.

A memorial service to honor and celebrate the life of Robert...