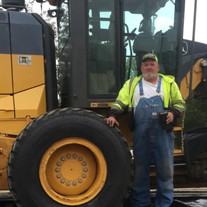 Ricky Wayne Martin, age 57, lost his hard-fought battle with cancer at his home in Milburn, Oklahoma on October 22, 2020. Ricky was born on January 18, 1963 in Ada, Oklahoma to Charles Albert Lee and Wanda Jo (Lewis) Martin. He was a hand for Johnston County for 17 years and a Volunteer Firefighter at Bromide for 14 years. He married the love of his life, Vicki Lynn Boulton, on December 24, 1984 at Calvary Baptist Church in Tishomingo. Ricky spent his life giving to others and would give the shirt off of his back for someone and would never ask for anything in return. He never met a stranger and would never turn someone away; a heart of gold and a real love for people, especially his family. He was the best husband, dad and papa around. Ricky was a strong Christian man; a fighter, never giving up faith, hope and love. Preaching the gospel and sharing his faith until his last breath because he wanted to make sure his family knew how important it was for him to one day see him again. Cheerleading coach? Yep, Ricky was the guy! He would go out numerous times on the court with his daughters during games to do cheers because Milburn didn’t have cheerleading. He knew that is what his girls wanted to do so he was right there next to them. Ricky has fought a good fight; he has finished the race and he kept the faith. A true home town hero, warrior and fighter who has left a legacy behind him that will never be forgotten. Ricky is preceded in death by his parents, Charles and Wanda Martin; one grandchild. Those he leaves to cherish his memories are his loving wife, Vicki Martin; children, Joshua Martin and fiancé Nikki Gaston, Erica Martin, Heather Pierce and husband Clifton “Levi”; grandchildren, Alleigh Pierce, Luke Pierce, Paisley Martin; sister “sissy, Virginia Lee Gray and husband David Leslie; brother, Albert James Martin and wife Rhonda, Charles Lynn Martin and Sandra; bonus kids, Aimee Bidabe and son Junior, Cecelia Coppedge, Peggy and Jennifer Martin; bonus grandson, Bentley and numerous nieces, nephews and friends who will miss him dearly. Those serving as pallbearers for the service will be Josh Martin, Levi Pierce, Junior Martin, James Martin, Bobby Martin, Bill Martin, Chad Lowe Honorary pallbearers will be Albert “James” Martin, Charles “Lynn” Martin, Erica Martin, Heather Pierce, Ronnie Coppedge, Don Cagle, Johnston County Boys, aka “The Girls”. Funeral Services for Ricky Wayne Martin will be held on Monday, October 26, 2020 at 10:00 AM at Camp Simpson in Bromide, Oklahoma. Interment to follow at Pontotoc Cemetery. Family hour will be on Sunday, October 25 from 3:00 - 5:00 PM.

Ricky Wayne Martin, age 57, lost his hard-fought battle with cancer at his home in Milburn, Oklahoma on October 22, 2020. Ricky was born on January 18, 1963 in Ada, Oklahoma to Charles Albert Lee and Wanda Jo (Lewis) Martin. He was a hand for... View Obituary & Service Information

The family of Ricky Wayne Martin created this Life Tributes page to make it easy to share your memories.