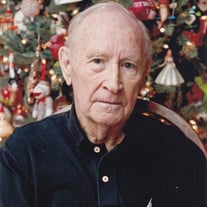 Raymond E. Cleveland, formerly of Sulphur, passed away in Shawnee on May 20, 2019. He was 91 years old. Ray, married his high school sweetheart, Ginger Warren Cleveland after they both attended Sulphur High School and Ray went to East Central to play football and Ginger went to Wesley School of Nursing. It was a union that lasted the better part of 60 years. After serving his country during the Korean Conflict in the U.S.A.F., Ray received the first of his two bachelors’ degrees from East Central. A Master’s Degree from OSU followed by a Doctorate from O.U. allowed Ray to serve students in a variety of positions including: as a high school English/Biology/teacher/football coach, high school principal, Dean of Students, Academic Dean, College President, and Professor of Educational Administration. Ray loved to hunt, fish, and fly his Cessna 182, but was a horrendous golfer. His passion was singing, which started in a Sulphur Barbershop Quartet, “Three Flats and a Spare”. He continued his love of music serving for a time, as choir director for the Calvary Baptist Church in Sulphur and the 1st Baptist Church of Tishomingo. His love of singing was only surpassed by his love of family and his love of God. Ray was preceded in death by his wife Ginger; parents, Elmer and Edna (Runyan) Cleveland; and six older siblings. Between singing engagements, 3-11 hospital shifts, and late nights at the library, Ray and Ginger were responsible for also creating: Mark, John, Greg, and Jeff along with sister Valerie, all of whom survive. Ray loved his children, but the real twinkle in his eye formed when he was spending time with any of his seven grandchildren or four great grandchildren. Services will be held at Calvary Baptist Church, Tuesday, May 28th, at 11:00 a.m. with Pastors Bill Leverage and Steve McAlister officiating. In lieu of flowers, the family has requested donations be sent to Oklahoma Baptist Homes for Children, Falls Creek Baptist Conference Center or your local Hospice. provider. Arrangements by DeArman Funeral Home of Sulphur. online condolences may be sent to www.dearmanfuneralhome.com The family will receive visitors on Monday May 27 from3pm to 5pm at the DeArman Funeral Home in Sulphur.

Raymond E. Cleveland, formerly of Sulphur, passed away in Shawnee on May 20, 2019. He was 91 years old. Ray, married his high school sweetheart, Ginger Warren Cleveland after they both attended Sulphur High School and Ray went to East Central... View Obituary & Service Information

The family of Raymond Ellsworth Cleveland created this Life Tributes page to make it easy to share your memories.

Raymond E. Cleveland, formerly of Sulphur, passed away in Shawnee...