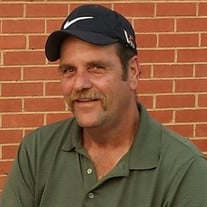 Randy Antrikin Sr. Randy David Antrikin (Randy Sr.) passed away at the age of 63. Randy lived in Ravia Oklahoma with his wife Julia. Randy died in the Bellvue Nursing home on Sunday January 16th, 2022, of natural causes after battling multiple medical issues over the last few years. Randy was born on April 12, 1958 and was raised in Oklahoma City. He was raised by his father Van & his mother Shirley. Randy married Cathy and had 4 children named Tammy, Randy, Mindy, & Sherri. As a blended family, he also helped raised Chris and Sean for the majority of their childhood whom he loved greatly. Randy was involved in construction his entire life. At a very young age, he learned how to lay brick and eventually started his own business bricking houses. Randy was well loved in the construction world. He was a master at his craft and an excellent teacher. He took pride in the small details. It was not uncommon for him to critique the brickwork on buildings when he went into a house or building. Randy loved the profession that he chose, and it showed in his work, but more than that he loved his family. Randy was a huge family man. There was very little that could pull Randy away from his children. He lived a life full of great memories with his kids. Randy even incorporated his kids into his work and hobbies to spend more time with them. He loved to play golf and poker. He would strike up games at home with poker chips and take his kids to work and golf with him often. Randy really loved doing traditional things. Every year he would go to the state fair with the kids and live it up like there was no budget even though there was. He also loved Christmas. It was always his favorite time of year because of quality time with his family. He sang Christmas songs year-round. After his kids were mostly grown, Randy met Julie and they married in 2013. Randy was a true family man. He welcomed 3 more amazing sons into his life and treated them as sons. That’s the kind of loving man he was. Randy found his perfect match with Julie because they loved almost all the same things. Weekend remodeling projects were never in short supply. A few years later Randy retired from construction and spent most of his time doing the things he loved to do with Julie by his side. He loved to garage sale, go to Casinos, and play bingo. He was a true jokester and always tried to make you laugh no matter the situation. The last several years of his life was full of laughter wherever he went. Randy was a loving husband to his wife Julie and a devoted father to kids Sean, Chris, Adam, Dusty, Chris, Tammy, Randy, Mindy, & Sherri. Randy was a beloved grandpa to over 28 grandchildren and 4 great grandkids. He was a loving Husband, Father, Grandpa, Mustache papa, Teacher, & Friend. He will be incredibly missed by all. Funeral Services to honor and celebrate the life of Randy David Antrikin will be held at 1:00 PM Thursday, January 20, 2022 at DeArman-Clark Funeral Home Chapel. Interment to follow at Ravia Cemetery. A public viewing will be held on Wednesday, January 19 from 9:00 AM - 5:00 PM at the funeral home.

The family of Randy David Antrikin created this Life Tributes page to make it easy to share your memories.