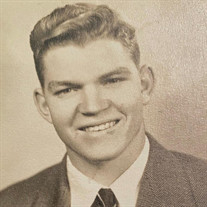 R J Hill was born May 21, 1929 in Blanchard Ok to Gordon Joseph and Mary (Terrell) Hill. He entered eternal life on Friday January 14, 2022 peacefully at his home in Sulphur, OK at the age of 92 years 7 months 23 days. R J grew up in Cole/Blanchard area with his 3 brothers and 1 sister. He attended school in Blanchard Ok. This is where he met and fell in love with his High School sweetheart, Margie Lee Price. They were married at Margie’s parents’ home on May 21st, 1948. They started their family in Oklahoma City, OK. After leaving Oklahoma City in 1960, they resided in numerous places before moving to Sulphur, OK in 1963. This is where they settled and built the home where they lived until they passed. R J started working at Crane Supply in Oklahoma City. From there he worked up from the warehouse to sales. He traveled the entire state of Oklahoma until he became a licensed plumber and worked in several different cities. After working several years as a plumber, he opened a business with a partner after moving to Sulphur, OK as F&H Mechanical Contractors. After a few years he started his own business Hill Heating and Air and operated it for decades. R J was a state champion rafter cutter and builder at the Oklahoma State Fair when he was a senior in high school. R J loved deer hunting and fishing. He enjoyed his grandchildren and great children. He and Margie enjoyed cooking Sunday dinners for all of the family. He enjoyed gardening until his last 3-4 years. He enjoyed watching his grandkids play sports. He enjoyed spending every morning with Margie at the Donut Shop. They were married for 72 years, 6 months and 17 days before Margie’s passing. He was preceded in death by wife Margie Lee Hill December 8, 2020; his parents Gordon Joseph and Mary Hill; his brothers Cecil Lavelle “Dobber” Hill; William “Bill” C. Hill and son-in-law Jim Moss. He is survived by his Sons: Terry Hill of Sulphur, OK Randy Hill of Sulphur, OK Daughter: Tammy Moss of Sulphur, OK Special Daughter-in-Law: Judy Hill of Edmond, OK Medical Healthcare Advisor: Kristy Cain 6 Grandchildren and 13 Great- Grandchildren: Jerrad Hill, wife Karissa and children Lauren and Mason of Edmond, OK. Jeremy Hill, wife Theresa and children Katherine and Henry of Tulsa, OK. Amy Lynn Hill and fiancé Jerry Alexander and children Christopher, Katelynne, Jordyn, and Alayna of Davis, OK. Andrew Hill and son Matthew of Davis, OK. Casey Moss, wife Chris and children Grayson and Tucker of Cole, OK. Dakota Moss, wife Stephanie and children Hadley and Caden of Newcastle, OK Brother: Alfred “Pete” Hill Sister: Alma Jo Hughes Pallbearers are grandchildren: Jerrad Hill, Jeremy Hill, Amy Hill, Andrew Hill, Casey Moss and Dakota Moss Honorary Pallbearers: Mason Hill and Christopher York Services will be held Tuesday January 18, 2022 at 10:00AM at Crossway Baptist Church Chapel officiated by Rev Bill Leveridge.. Graveside Burial will be at 1:30PM at the Blanchard Cemetery under the direction of DeArman Funeral Home online condolences may besent to www.dearmanfuneralhome.com FAMILY WILL RECEIVE VISITORS MONDAY FROM 5PM TO 7PM AT THE DEARMAN FUNERAL HOME.

R J Hill was born May 21, 1929 in Blanchard Ok to Gordon Joseph and Mary (Terrell) Hill. He entered eternal life on Friday January 14, 2022 peacefully at his home in Sulphur, OK at the age of 92 years 7 months 23 days. R J grew up in Cole/Blanchard... View Obituary & Service Information

The family of R. J. Hill created this Life Tributes page to make it easy to share your memories.