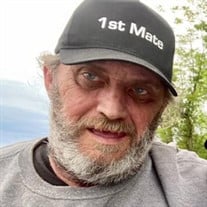 Peter Michael Faulkenberry, Jr., a resident of Wynnewood, OK, passed away Wednesday August 25, 2021 at his home west of Wynnewood. He was born August 17, 1963 in Lindsay, CA to Peter Michael Faulkenberry, Sr. and Phyilis Sullivan. Mike also known as (Big Pete) lived in many cities throughout Oklahoma and California growing up which paved the path to him being a long truck driver. His heart was always with the OU Sooner Nation before taking the road. Mike served our country in the US Army when he was stationed in Alaska. He was moved by the beauty of the land. Mike wore the red, white, and blue on his sleeve and followed Lee Greenwood's words of God Bless the USA. After his stint in the Army Mike followed his calling by hitting the road. By all accounts he logged close to 2 million miles on our nations highways. He was a driving encyclopedia. Every chance he had he would cast his line in the water, fishing being his favorite hobby. His passion was to teach everyone how to bait a hook and cast a line taking great pride in their joy. Mike was blessed with one daughter - Elizabeth Fitzhugh of OKC, OK and 2 grandchildren - Kylee and Jason Brown, 3 step children - Patrick Whitebird of Duncan, OK, Matthew Whitebird of Yukon, OK, and Robert Whitebird of Yukon, OK, brother - Rodney Faulkenberry of OKC, OK, sister - Kristie Bolin of Wichita Falls, TX. Mike was preceded in death by his parents, siblings - Shelby Faulkenberry, Robert Davis, and Daryl Davis. No Services scheduled at this time.

The family of Peter Michael Faulkenberry Jr. created this Life Tributes page to make it easy to share your memories.