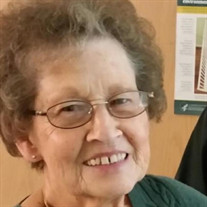 Peggy Ann Edwards Cecil was born to Alexander Kirk Edwards and Dixie Vera White Edwards on May 7, 1931 in Springdale, Arkansas. Peggy was the middle child of five, with a sister and brother on either side. She grew up in Springdale graduating from high school in 1949. Peggy was always a career woman. She started working in high school making malts and shakes at the local downtown soda shop. After graduation, she was hired by Western Union, and was eventually transferred to an office in Muskogee, Oklahoma. That moved proved magical as she met her future husband, Sam Cecil. They married in Hominy, Oklahoma on November 22 1952, and celebrated 66 years of marriage before Sam passed away in January of 2019. By conservative estimates, the couple moved 18 times during their marriage. Each time, Peggy packed up her household and her two daughters, and joined Sam on his career path. During those years, Peggy worked as a bookkeeper in multiple businesses, and she was a bank teller. In 1963, when they made their first move to Tishomingo, Peggy was hired as the secretary for the Johnston County Extension Service. After a two year move to Stratford, Oklahoma, they returned to Tishomingo in 1971. Peggy soon was hired as the executive assistant in the Nursing Department at Murray State College. She retired from Murray in 1991 after working 18 years. Peggy had many varied interests and hobbies. She and Sam were active members of the Tishomingo United Methodist Church, and for many years she was half of a team who counted the offerings every Sunday. She also volunteered with the county election board, and worked elections into her early 80's. Peggy loved to play Bridge, and was still playing with her good friends every week until last fall. She was an avid reader, and she enjoyed doing cross stitch quilts in the evenings. She and Sam loved watching sports, both on tv and, better yet, watching their grandchildren participate in sports. Peggy was a fantastic cook. She loved to prepare candy, cookies, and other treats to give to family and friends. She also made the best cornbread dressing at Thanksgiving! Peggy enjoyed traveling, and she and Sam made numerous bus trips to the northeast and northwest United States. They took their dream cruise to Alaska. They also made trips to the east and west coast to visit their daughter Deb's family. Sam and Peggy took trips with dear friends to Las Vegas, New Mexico, and Arkansas. She attended the first inauguration of President Clinton in Washington DC, with her sister Christine. Peggy was a kind, caring, and generous person to all. She took great care of Sam for many years, and her greatest joy was her four grandchildren and three great-grandchildren. Peggy was preceded in death by her beloved husband, Sam, her parents, Kirk and Dixie Edwards, brothers, Billy Edwards and Fred Edwards, and sister, Margie Dugan. She is survived by her daughters and their spouses, Debra and Jeridan Strong of Argyle, Texas, and Donna and David Smith of New Boston, Texas. Family members include grandchildren, Dan and Lindsay Strong, Rachael Strong, Samuel and Kiersten Strong, Holly and Micheal Connelly; great-grandchildren, Jeridan and Nolan Strong, and River Santos. She is also survived by her sister, Christine Fine of Springdale, Arkansas, and her sister-in-law, Janet Jones of Conway, Arkansas, also nieces, nephews, and great nieces and nephews. Peggy was much loved and will be greatly missed. Funeral Services to honor and celebrate the life of Peggy Ann Cecil will be held at 11:00 AM Tuesday, June 16, 2020 at the First United Methodist Church in Tishomingo, Oklahoma. Interment to follow at Tishomingo Cemetery.

Peggy Ann Edwards Cecil was born to Alexander Kirk Edwards and Dixie Vera White Edwards on May 7, 1931 in Springdale, Arkansas. Peggy was the middle child of five, with a sister and brother on either side. She grew up in Springdale graduating... View Obituary & Service Information

The family of Peggy Ann Cecil created this Life Tributes page to make it easy to share your memories.