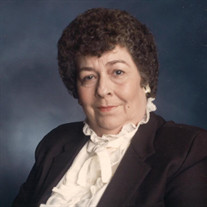 Pauline (Mitchell) Bowles was born on March 28, 1928, to James Franklin Mitchell and Ollie Lee. She was a lifelong resident of Johnston County and passed from this life on December 5, 2021, in Oklahoma City at the age of 93. She attended Wapanucka and Fillmore schools. Pauline worked at Skilled Nursing Facilities as a hairdresser and in food preparation for a number of years. She also worked at the Community Children’s Shelter in Ardmore. After retiring from traditional jobs, she worked for several years as a caregiver for the elderly in their homes. She was a hard worker and believed everyone should work as hard as she did! She married M.T. “Shorty” Bowles on December 9, 1945, in Ada, Oklahoma. They celebrated 36 years of marriage before his passing on November 3, 1982. She loved gardening and canning for her family in her younger years. After taking a break from gardening for several years, she surprised everyone by making a garden this year. She was always keeping busy. She also enjoyed solving word search puzzles out of her “puzzle books” as she called them. She would buy them by the case. The most important thing to her was spending time with family and she loved them all dearly. She had an unbreakable bond with her granddaughter, Denise, whom she thought the world of. She loved bragging on her to anyone that would listen. She had a very special place in her heart for her great-granddaughter, Danya. She was very proud of her and all her accomplishments. She loved attending every special occasion of hers that she could, whether it be a birthday, graduation, or 4-H Banquet. She truly treasured those precious memories with her. She had a feisty spirit that will live on in the memories of her children, grandchildren, and great-grandchildren forever. She is survived by a daughter, Brenda Standifer of Tishomingo, a son, Jerry Bowles and wife Ruby of Lone Grove; four grandchildren, Darryl Brooks of El Reno, Denise Hook of Tishomingo, Kevin Standifer of Tishomingo, and Jerad Bowles of Yukon; two great-grandchildren, Danya Hook of Tishomingo, and Eli Bowles of Yukon. She was preceded in death by her parents, James Franklin Mitchell and Ollie Lee; her husband, M.T. “Shorty” Bowles; a son, Melvin Bowles; and two brothers, LaCharles Perkins and Leon Perkins. Funeral services to honor and celebrate her life will be held on Friday, December 10, 2021, at DeArman-Clark Funeral Home in Tishomingo, Oklahoma. Serving as pallbearers are Jerry Bowles, Kevin Standifer, Jerad Bowles, Allen Perkins, Danny Hook, and Dee Holliday. Honorary pallbearers are M.D. Bowles and Darryl Brooks. Interment followed in the Tishomingo Cemetery.

Pauline (Mitchell) Bowles was born on March 28, 1928, to James Franklin Mitchell and Ollie Lee. She was a lifelong resident of Johnston County and passed from this life on December 5, 2021, in Oklahoma City at the age of 93. She attended Wapanucka... View Obituary & Service Information

The family of Pauline Bowles created this Life Tributes page to make it easy to share your memories.