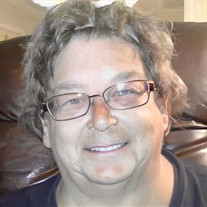 On Tuesday, May 10th, Paula Gayle Barnett passed away at the age of 60 in Norman, Oklahoma. Paula was born on September 1,1961 in Oklahoma City to Faye and Bill Jones. Paula, who was known to most as Aunt P, was a loving and generous sister, aunt, and friend. Paula was no stranger to hard work, she worked for Conoco Phillips for 26 years, starting as a gas station attendant and ending as a safety health and environmental auditor. After leaving ConocoPhillips She received a degree in environmental science from Front Range University. Paula had an extensive and eclectic CD collection, with artists ranging from George Strait, Adele, KISS, Elton John, and others. We fondly remember her air guitar, drum, and fiddle sessions whenever she got really into a song. Paula instilled her love of classic country, fishing, and rodeo into her nephews. She volunteered for 10 years at the Norman Round-Up Club to make sure that young people could enjoy the sport. Her style was simple. She hasn’t worn a dress since 1979. Her mother begged her to wear a dress and shoes to her high school graduation. In exchange, she was gifted new rims for her Camaro. Paula was the type of woman to give you her last dollar if you needed it. She often opened her home to any stray animal or human. Paula was selfless even in her passing. She was adamant that she wanted to donate her organs and was able to make a difference in the lives of nine others. However, she also had a fiery side. If she got angry enough it was not unheard of for her to throw a phone, calculator, tablet, rearview mirror, or even a printer. Paula enjoyed woodworking and used her talents to create meaningful artwork for others. She also loved spending time with family fishing at the lake. Paula is preceded in death by her granny, Ruby Thomas. Her mother and father Bill and Faye Jones and her brother Mike Thomas. She is survived by her sister Sharon Jones. Her brothers Greg (wife Barbra) Thomas and Brad (wife Callie, children Macey, Caroline, Samantha, and Georgia) Thomas. Her lifelong best friend Rita Mullenberg. Her nephews Brayden (wife Miranda, children Annabelle and Elaina) Jones, Kevin Chain, and Shawn Chain; and many more nieces, nephews, friends, and family too numerous to list but not forgotten. A graveside service will be held on Saturday, May 14th at 1 PM at McGee Cemetery in Stratford, Oklahoma. A viewing will be held on Friday, May 13th from 5-7 PM at Pickard Funeral Home. Flowers can be sent to Pickard Funeral Home, 301 W Smith St, Stratford, OK 74872.

On Tuesday, May 10th, Paula Gayle Barnett passed away at the age of 60 in Norman, Oklahoma. Paula was born on September 1,1961 in Oklahoma City to Faye and Bill Jones. Paula, who was known to most as Aunt P, was a loving and generous sister,... View Obituary & Service Information

The family of Paula Gayle Barnett created this Life Tributes page to make it easy to share your memories.

On Tuesday, May 10th, Paula Gayle Barnett passed away at the...