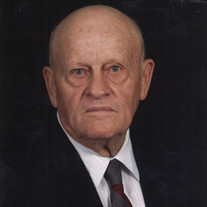 Orville Eugene Benton, age 90, passed from this life on March 18, 2020 at Baylor Medical Center in Dallas, Texas. Orville was born on January 6, 1930 to Glenn and Ethel Gilreath Benton. He spent his years growing up in Johnston County and was a graduate from Ravia High School. He married the love of his life, Dois Kathleen Peden, on September 15, 1950 at Petti John Springs near Russett. Three beautiful children, a multitude of grandchildren and 69 wonderful years of marriage since. Orville proudly served our country in the United States Marines in the Korean War from 1952-1954. He was the jack of all trades when it came to building things; furniture, little trinkets and hope chest for all his grandchildren were his absolute favorite. Later in life, he became a book worm and even made a book case to display all of his books; Louis L’amour and Longarm Westerns were a few of his favorites. He adored watching his grandchildren play their ball games and was always their biggest supporter and #1 fan. A loving husband, caring father and the best grandpa around; he will be missed by all the lives he had the chance of impacting in his 90 years on this earth. Orville is preceded in death by his parents, Glenn and Ethel Benton; 2 sisters, 1 brother and 1 granddaughter. Those he leaves to cherish his memories are his beautiful bride of 70 years, Dois Peden; children, Sheryl West and husband James, Ladonna Cook and husband Ed and son Larry Benton; grandchildren, Kristi Bradley, Jamie Vernon, Brice West, Kaylea Billings, Audrea Dickerson, LaNeill Cook; great grandchildren, Bailey Miller, Rylee Hughes, Kenlea Vernon, Preslee Vernon, Houston Vernon, Roxanne Dickerson, James Dickerson; step grandchildren, Austin Vernon, Brock Bradley and Taylor Taylor, Harley Henry; and a host of nieces, nephews and friends who will deeply miss him. A graveside service to honor and celebrate the life of Orville Eugene Benton will be held at 1:00 PM March 23, 2020. Family hour will be held on Sunday, March 22 from 2:00 - 4:00 PM.

Orville Eugene Benton, age 90, passed from this life on March 18, 2020 at Baylor Medical Center in Dallas, Texas. Orville was born on January 6, 1930 to Glenn and Ethel Gilreath Benton. He spent his years growing up in Johnston County and was... View Obituary & Service Information

The family of Orville Eugene Benton created this Life Tributes page to make it easy to share your memories.

Orville Eugene Benton, age 90, passed from this life on March...