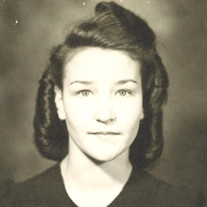 Opal S. Mayfield went to be with her Heavenly Father on March 23, 2021, at the age of 90. She passed away in Oklahoma City with her son and granddaughter by her side. Opal was loved by many people she met throughout her lifetime, right up until the last days of her life. Her unlimited capacity for love extended well beyond her husband, children, grandchildren, great-grandchildren and extended family of relatives. She truly personified the biblical command of “Love your neighbor as yourself” (Matthew 22:39). She had a particular fondness for babies, the elderly, people with special needs and disabilities, children of all ages, and dogs and cats. Opal was born on May 14th, 1930, to Aubrey “Buster” Tisdell and Ruby (Wigington) Tisdell in Troy, OK. After graduating from Mill Creek High School, Opal attended East Central University. Her best friend, Wanda Mayfield, introduced Opal to Wanda’s older brother, Warren, while Opal was at ECU. It became the beginning of a loving relationship that culminated in their marriage in 1951 and lasted 68 years until Warren’s passing in 2019. Opal and Warren began their family in 1952 with the birth of their first child, Ella “Gail”. Because of Gail’s disabilities from birth, Opal became a life-long advocate for her and others with similar needs. Opal devoted her life to Gail and their bond was unique and immeasurable. Their family expanded with the birth of a son, Gary, and 2nd daughter, Susan. Further exhibiting Opal’s unlimited capacity for love, she and Warren chose to adopt their 3rd daughter, Teresa “Pappy” Mayfield. Seven grandchildren and 10 great-grandchildren later, their family was complete. Opal and Warren spent many years in Shawnee, OK. Opal’s generosity was legendary within her church, community, family, and basically anyone in need who crossed her path. She was especially instrumental in helping Vietnamese immigrants that moved into the Shawnee community. As a member of Shawnee First Baptist Church, Opal served on the Personnel Committee and also loved volunteering in the church nursery. Opal and Warren moved from Shawnee to Tishomingo, OK in 1995, returning to Opal’s roots and her beloved Pennington Creek. The “Rock House” was their home for 15 years and became a cherished family gathering place. Opal had a tremendous love of travel which prompted many family trips that included places like California, Alaska, Europe, Canada, New England, Florida, as well as numerous other places. She also had a lifelong love of reading and was proud of her personal library and enormous collection of books. Opal will be remembered as a kind, loving, sacrificial, and very generous Wife, Mother, “Nanaw”, “Great-Nanaw”, Sister, Sister-in-Law, Mother-in-law, Aunt, Cousin, and Friend. Opal was predeceased by her parents, her husband Warren, daughters Gail and Teresa, and great-grandson Abel Crawford. In his later years, Warren was often known to state, “I’m the luckiest Guy in the world” because of his long and devoted marriage with Opal. Now, he is the “Luckiest Guy in Heaven” because he and Opal have been reunited. Opal is survived by son Gary Mayfield, daughter Susan Pogoloff (Kevin), grandchildren Paul Mayfield (Melissa), Warren Beck (Jenny), Amanda Oliveira (Gustavo), Kelly Crawford (Daniel), James Robinson, Tyler Robinson, Bo Pogoloff, sisters Lucille Allen and Daisy Hale, sister-in-laws Wanda Moore and Wilma Kidd, 9 great-grandchildren, numerous beloved nieces, nephews, cousins and son-in-law Walter Bartlett. Graveside services for the family will be held at Troy Cemetery, Troy, Oklahoma on Tuesday, March 30th, 2021. A CELEBRATION OF LIFE will be scheduled in the future for others to attend who would like to honor Opal.

Opal S. Mayfield went to be with her Heavenly Father on March 23, 2021, at the age of 90. She passed away in Oklahoma City with her son and granddaughter by her side. Opal was loved by many people she met throughout her lifetime, right up until... View Obituary & Service Information

The family of Opal S. Mayfield created this Life Tributes page to make it easy to share your memories.

Opal S. Mayfield went to be with her Heavenly Father on March...