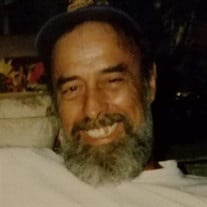 Norman Gene Blue age 75 of Tishomingo, Oklahoma passed from this earth on July 6th, 2021. He was one of 16 children born to Robert "Curry'' and Evelyn (Slossan) Blue on December 8, 1945 in Sacramento, California. Norman was known for his strong work ethic and was a self-employed, skilled builder. He also worked in refrigeration restoration early on in his life. His wife Sonya could always be found working along side him whatever the job was. He truly was a jack of all trades and could build just about anything. Norman had a great love of the outdoors. When he wasn't working he spent his time fishing, hunting, gardening or tinkering in his shop. He told great stories and he always had the best jokes. He could be hard headed and opinionated, but he had a great sense of humor and was always ready to welcome you to come and sit with him on his front porch. Norman served his country from 1965 to 1967 in the United States Army as an ammunition specialist during the Vietnam War. He was tasked with receiving, storing, and issuing guided missiles, large rockets and explosives. Norman is preceded in death by his parents, Robert “Curry” Blue and Evelyn (Slossan) Blue, five brothers, Randy Alan Blue, Perry "Chic" Blue, Evert Blue, Stoney Blue, Johnny Blue, brother in law, Morris Glenn Anderson and one sister, Anna Moran and her husband Richard. He is survived by his wife, Sonya (Godwin) Blue, four daughters and two sons, Tabethia Griffin and her husband Eddie of TX, Norma Jean Clement and her husband Kerry of TX, Randy Blue of OK, Veronica Harden and her husband James of OK, Samantha Lewis of OK and David "Bubba" Moody and his wife Cristal of OK. He cherished his 20 grandchildren, Dalton Griffin, Demi Griffin, Kerra Clement, Connor Clement, Channing Clement, Christopher Blue, Sarah Blue, Brittany Harden, Daniel Tew, Damian Harden, Darian Harden, Daisy Harden, Emilee Moody, Camden Elkins, Callie Lewis, Tayler Smith, Tyler Smith, Skyler Smith, Arron Palmer, Jack Owen and 4 great grandchildren. He is also survived by two sisters, Nancy Anderson of TX, and Ameilia "Sissy" Blue of OK, seven brothers, Harry "Pip" Blue and his wife Brenda, Rick Blue, Lester Blue, Billy Blue, Rodney "Cookie" Blue, Darrell “Hound” Blue and Todd Blue all of OK, as well as many special nieces and nephews. Service will be held at the DeArman - Clark Funeral home on July 25th at 3pm. His nephew, Brandon Blue will officiate and long time friend, Darrell W. Walker will give the eulogy. After the service there will be a celebration of his life held at his home down at the bottom.

Norman Gene Blue age 75 of Tishomingo, Oklahoma passed from this earth on July 6th, 2021. He was one of 16 children born to Robert "Curry'' and Evelyn (Slossan) Blue on December 8, 1945 in Sacramento, California. Norman was known for his strong... View Obituary & Service Information

The family of Norman Gene Blue created this Life Tributes page to make it easy to share your memories.

Norman Gene Blue age 75 of Tishomingo, Oklahoma passed from this...