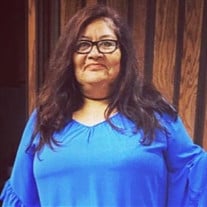 Funeral services to honor and celebrate the life of Nancy Darlene Wade will be held at 10:00 AM on Thursday, October 3, 2019 at Fletcher Auditorium on Murray State College Campus in Tishomingo, Oklahoma. A wake will be held from 6 to 8 PM on Wednesday at DeArman-Clark Funeral Home. Interment to follow at Seeley-Blue Cemetery in Connerville. Nancy Darlene Wade was born on January 31, 1961 in Talihina, OK to Bobby Johnson and Patsy (Baken) Johnson. She attended Sulphur Schools, but later received her G.E.D. and joined the United States Army. After leaving the Army, Nancy married her longtime love, Randy Wade. They moved to Dallas, TX where they had three children and later moved to Virginia where Randy was relocated for work. In 1997 they moved back home to Oklahoma. Nancy began working for the Chickasaw Nation at the Thackerville Travel Stop and soon transferred to Nutrition Services where she worked for several years. She transferred to a few different departments under the Chickasaw Nation, but made her way back to Nutrition Services, a department that she was passionate about and loved. Employed under Nutrition Services, Nancy earned an Associates Degree in Business Administration and completed several Leadership courses including Chickasaw Leadership Academy Bronze and Silver. Nancy was a proud Chickasaw citizen who loved her culture and was honored when she and Randy were asked to be a part of the Chickasaw Grassroots team. She loved the Chickasaw Nation and felt truly blessed to work under its leadership and vision to keep progressing forward. Nancy was a loving wife, mother, Ganna and friend. She greatly enjoyed spending time with her family, cooking Saturday morning breakfasts and Sunday dinners often. She was a friend to everyone and had so much compassion and love for those around her. She was fun to be around and loved to laugh and make others laugh with her cheesy jokes that were so terrible, you couldn’t help but laugh seeing her get such a kick out of them. Nancy had a servant's heart and a strong faith in the Lord. She and her husband started the church About the Father’s Business in Ardmore, attending every Wednesday and Sunday, where she would lead praise and worship with her angelic voice that was loved and admired by anyone who heard her sing. She and husband Randy were very active in their walk with Christ, traveling nationwide with various ministries, including Intertribal Council, HAPN, All Tribes DC and Nancy’s band, In His Gates. She continued to have faith and be a testiment of God’s love and grace each and every day, until the day she was called home. She is preceded in death by her parents, a brother Bobby Lee Johnson, Jr., and grandparents DeSeth and Lillian (Columbus) Baken, and Green and Lizzie Bell (Colbert) Johnson and a sister-in-law, Anita Wade. Nancy is survived by her husband of thirty-six years, Randy Wade, of Ravia, Oklahoma, Son Matthew Wade and his children: Malachi, Jonas, Skye and Moses Wade; two daughters, Bethany McCord and husband Brandon and their two children: Aden Carroll and Sydney “SJ” McCord, and Lillian Wade and her children: Zephaniah and Jeremiah Wade, all of Sulphur, Oklahoma. She is also survived by her brother, Jerry Johnson and his wife Suzanne of Coleman, Oklahoma, and her sister Paula Wade and her husband Kelly “KB” Brown of Ada, Oklahoma, and her Mother-in-law, Catherine (Wisdom) Pendergraft of Mill Creek, Oklahoma and brother-in-law, Steve Bell of Mill Creek, Oklahoma, and a host of other close relatives and friends.

Funeral services to honor and celebrate the life of Nancy Darlene Wade will be held at 10:00 AM on Thursday, October 3, 2019 at Fletcher Auditorium on Murray State College Campus in Tishomingo, Oklahoma. A wake will be held from 6 to 8 PM on... View Obituary & Service Information

The family of Nancy Darlene Wade created this Life Tributes page to make it easy to share your memories.

Funeral services to honor and celebrate the life of Nancy Darlene...