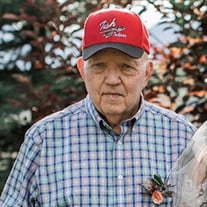 Milton Wayne Gilbert joined his Lord and Savior, Jesus Christ on Friday, December 11, 2020 in Tishomingo, Oklahoma. He was a beloved and respected member of his family and community. Milton was born on October 5th, 1940 in Oklahoma City, Oklahoma to Paul and Vada Gilbert. He graduated from Tishomingo High School in 1958. He went on to further his education at Murray State College, then later attended Southeastern University. After college, Milton held various jobs. He was the owner of Armstrongs Dry Goods Store in Tishomingo. A local resident told the family “Milton fitted me for and sold me the first boots I ever bought with my own money”. He was also known to help customers out if they were unable to afford something they really wanted or needed from the store. After his days at Armstrongs, Milton began working in the refrigeration industry. He worked as a salesman for 35 years. He loved to visit and connect with customers. Milton worked with his son, Clendon at Supermarket Services in Tishomingo, until the day he passed away. Milton married his “grade school” sweetheart, Twylia Gilbert in 1960. He met Twylia at Prairie View Grade School in 1946. They raised two children, Clendon Gilbert and Marci (Gilbert) Sneed. Milton enjoyed spending time with his two granddaughters Devon and Jaylon, who lovingly referred to him as “Pa”. Milton had a deep love for family, music and OU football. He began playing the guitar at a young age and later taught himself how to play the piano. He was a member of several bands throughout the years. Milton enjoyed playing music at the local nursing home and Church of the Nazarene. When his children were growing up, he taught many local teenagers and young adults how to play the guitar. Milton is survived by his beloved wife of 60 years, Twylia. Son, Clendon Gilbert and daughter-in-law, Shelley Gilbert. Daughter Marci (Gilbert) Sneed. Grandchildren Devon Gilbert-Reinhart and spouse Billy Reinhart, and Jaylon Sneed. Milton is also survived by brother Otis Gilbert and his wife Retta Gilbert, sister Paula Elrod and her husband Joe Elrod, in addition to many nieces and nephews. Milton is preceded in death by his parents Paul and Vada Gilbert. Funeral Services will be held Tuesday, December 15, 2020 at 2 p.m. at Church of the Nazarene in Tishomingo. Interment to follow at Tishomingo Cemetery. Those serving as pallbearers for the service will be Rick Hodges, Wesley Lanier, Justin Cellum, Todd Reed, Hal Showalter, Steve McAdoo, Colby Murray, Kenny Emerson. Honorary Pallbearers include Cecil Underwood, Keiler Parks, David McEvers, Billy Reinhart, Steve Cellum, Joe Eldrod, Paul Gilbert. The family wishes to express sincere gratitude for all of the prayers and support.

Milton Wayne Gilbert joined his Lord and Savior, Jesus Christ on Friday, December 11, 2020 in Tishomingo, Oklahoma. He was a beloved and respected member of his family and community. Milton was born on October 5th, 1940 in Oklahoma City, Oklahoma... View Obituary & Service Information

The family of Milton Wayne Gilbert created this Life Tributes page to make it easy to share your memories.