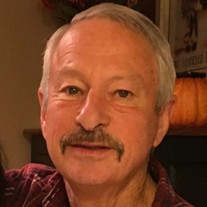 Michael Van McIver “Pernie”, 72, of Tishomingo, passed from this life on Wednesday, March 3, 2021 at Mercy Hospital in Oklahoma City, Oklahoma. Pernie was born on November 22, 1948 in Oklahoma City, Oklahoma to Van and Kaye Frances (Pirtle) McIver. He was a graduate of Tishomingo High School, Class of 1966 and went on to attend Murray State College and East Central University. Tishomingo was home to Pernie all of his adult life. He married the love of his life, Cindy Lou Rowe on August 26, 1977. Pernie was awarded a Purple Heart for proudly serving our country in the United States Army and also received a Service Award for the 20 years that he dedicated to the United States Postal Service as a rural mail carrier. In his spare time, you could usually find him fishing, gardening, golfing or getting his hands dirty restoring an old car. He never would pass up a day to go hang out at Lake Texoma. If you knew Pernie you knew he never went without a smile on his face and was a good friend and touched many lives. Pernie is preceded in death by his parents, Van and Kaye McIver; grandmother, Mildred Pirtle; uncle, Jody Pirtle. Those he leaves to cherish his memories of his beautiful bride, Cindy McIver of the home; daughter, Carrie McCormick and husband Jeff of Everett, WA; grandchildren, Austin Vernon of Tishomingo; sister, Linda Laverdier and husband John of Highland Village, TX; uncle, Jackie (Skip) Pirtle of Coleman; aunt, Ann Jenson of Hillsboro, TX; in-laws, Ray Rowe and wife Brenda of Tishomingo; nephews, Danny McGraw of Hickory Hills, TX, Chris Rowe of Conroe, TX, Dustin Rowe of Oklahoma City; nieces, Kerry Morgan of Corinth, TX, Natasha Gray of Tishomingo, Dawn Bonham of Durant; pets, Oreo and Tommy and a host of friends who will deeply miss him. A celebration of life will be held at 1:00 PM on Monday, March 8, 2021 at DeArman-Clark Funeral Home Chapel with Pastor Kelly Mack McCarthick to officiate. Honorary pallbearers are Homer Joe Ross, Ray Rowe, Jeff McCormick, Austin Vernon, Skip Pirtle and Dave Tipps. In lieu of flowers, memorial donations may be to the Washita Memorial Post 4869.

The family of Michael Van "Pernie" McIver created this Life Tributes page to make it easy to share your memories.

Michael Van McIver “Pernie”, 72, of Tishomingo, passed from this...