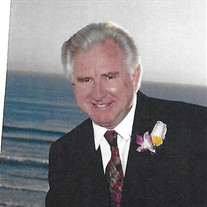 On Monday June 17, 2019 Michael Hisaw, loving father of four children, passed away at the age of 74. Michael Craig Hisaw was born to Athena and Craig Hisaw on May 14, 1945 In Sacramento, California. He attended school most of his life in Idaho, where he graduated in 1963 at Minadoka High School. He went to College at Idaho State University. On June 11, 1966 he married Wanda Hisaw. Together they farmed 2,000 acres in the Raft River, Idaho area. They had their first son Craig R. Hisaw on October 15, 1968. On December 8, 1970 their second son Douglas Hisaw was born. Mike was an entrapanuer and opened up Hisaw Realty in Burley, Idaho. Shortly after Mike added Hisaw Construction, where one of his achievements was bringing the development of the Burley Mall to the town. On February 21, 1979 his daughter Nicole Hisaw was born. Mike loved starting new endeavors, wherever he went. He enjoyed flying; in fact so much he got his pilot license. He enjoyed flying his planes, and flying them from Idaho to Oklahoma to visit his Mom and Dad. Mike and Wanda divorced after 17 years of marriage. Mike got remarried two more times, one of those marriages his daughter Brooke Hisaw was born on September 17, 1997. Mike enjoyed his Indian Heritage, and was proud to be of Cherokee Blood. He collected Indian art and memorabilia. He also enjoyed Hunting and fishing with family, whether in Idaho or on the Ranch. Mike had a love of all things horses. He enjoyed watching all his horses roam around on his ranch. You would often find him sitting out on his deck enjoying nature. He also loved bird watching, and would feed the birds every morning. Mike also was a great cook, and loved to BBQ with family. His family all enjoyed Thanksgiving turkeys that he would BBQ on the Charcoal grill. He will be missed by all of those who had the chance to know him. Preceded by; his parents, Craig and Athena Hisaw. Survived by; two daughters, Nicole Hisaw Engle & husband Daniel of Holdenville, OK. Brooke Hisaw of the home in Stratford, OK. Two Sons; Craig Randolph Hisaw of Boise City, Idaho; Douglas Dean Hisaw of Stratford, OK. five grandchildren; Austin, Cameron and Bodie Hisaw, Aleeah Rich and Brently Engle; One great-grandchild, Abrey Hisaw. Visitation; will be Thursday June 20, 2019 from 5 to 7 at DeArman/Pickard Funeral Home Stratford, OK. Services; 10:00 AM Friday June 21, 2019 at DeArman/Pickard Chapel Stratford, Oklahoma. Officiating; Wayne Winn. Burial McGee Cemetery Stratford.

On Monday June 17, 2019 Michael Hisaw, loving father of four children, passed away at the age of 74. Michael Craig Hisaw was born to Athena and Craig Hisaw on May 14, 1945 In Sacramento, California. He attended school most of his life in Idaho,... View Obituary & Service Information

The family of Michael Craig Hisaw created this Life Tributes page to make it easy to share your memories.