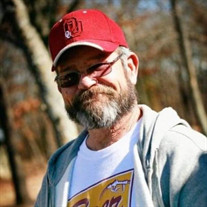 Michael Dennis Green, 72, passed from this life on Wednesday, February 17, 2021 at his home in Ada, Oklahoma. Michael was born on February 25, 1948 in Oklahoma City, Oklahoma to William A. and Pauline E. (Underwood) Green. He proudly served our country in the United States Army from 1968-1970 and was a Vietnam Veteran. Michael spent his working career for 26 years with Southwestern Bell as a phone technician. He met the love of his life and best friend, Pattye Ruth Jones in 1995 and the two married in Madill, Oklahoma on March 18, 1999. Michael was a kid at heart and lived life to the fullest; never meeting a stranger, making friends with everyone, and playing a mean game of horseshoes. He loved puttin’ around in his car, four-wheeling, golfing and big family cookouts. The kids and grandkids will tell you he enjoyed tracking them on Life 360 and would frequently “heart” their location once they arrived. He was the ultimate dad-jokester and would offer up a wink and corny joke for every occasion. A selfless, giving and caring man who always went out of his way to make sure others were cared for and felt loved. Michael is preceded in death by his parents, Bill and Pauline Green; sister, Kristi Pitmon; late wife, Linda Green. Those he leaves to cherish his memories are his wife, Pattye Green of Ada; children, Mark Green of Boerne, TX, Ryan Green of Ardmore, Russell Davis of Reagan, Shannon Gurney and husband Josh of Bethel Acres, Micah Underwood and husband Jason of Choctaw, Jeffery Hansen and wife Adrienne of Durant, J.D. Hansen and wife Casey of Stillwater, Jennifer Bartel and husband Jacob of Madill; sister, Patricia Schultz and husband Frank of Red Rock, TX; 21 grandchildren, 5 great grandchildren; fur babies, Sammy, Lucy and Lacy; and a host of nieces, nephews and friends who will deeply miss him. A celebration of life will be held at 11:00 AM on Tuesday, February 23, 2021 at Trinity Baptist Church in Ada, Oklahoma with Pastor Rusty Fuller to officiate.

Michael Dennis Green, 72, passed from this life on Wednesday, February 17, 2021 at his home in Ada, Oklahoma. Michael was born on February 25, 1948 in Oklahoma City, Oklahoma to William A. and Pauline E. (Underwood) Green. He proudly served... View Obituary & Service Information

The family of Michael Dennis Green created this Life Tributes page to make it easy to share your memories.

Michael Dennis Green, 72, passed from this life on Wednesday,...