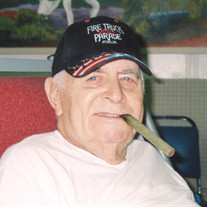 Funeral services for Medgar Dean Beaver, also know as "Frog" will be held at 2:00 PM Friday, November 1, 2019 at DeArman-Clark Funeral Home Chapel. Interment to follow at Condon Grove Cemetery. Family night will be from 5:00 - 7:00 PM on Thursday, October 31, 2019. Medgar Dean Beaver, also known as “Frog” to most passed from this life at the age of 92 on October 29, 2019 at the Oklahoma Veterans Center in Ardmore, Oklahoma. Medgar was born on December 4, 1926 in Teller, Oklahoma to parents John Atler and Ennie May (Swindell) Beaver. A graduate of Tishomingo High School, Medgar spent the majority of his life calling Johnston County and Tishomingo home. His working years were spent being an electrician but his children would tell you that he was really good at sitting and pointing out things to do. He spent 37 years in the Army retiring as CMSG in 1986. He was in World War II and the Korean Was. He was also a member of the Tishomingo Fire Department in the early 1950s. Frog loved Bryan’s ribeye steaks, catfish and homemade banana ice cream; who are we kidding Frog loved all food. He had a love for traveling; didn’t matter where he went, he was always in for a good trip to see new or old place. Frog adored dogs; some jokingly say more than he loved people but that wouldn’t be right because he had such a big heart for people and especially his family. He loved having large family gathering and having all of his children and grandchildren around. Medgar is preceded in death by his wife, Mildred Beaver; parents, John and Ennie Beaver; brothers, Douglas and John Beaver; sister, Charity Stine; grandson, Chad Shodeen. Those he leaves to cherish his memories are his three daughters, Deborah Marler, Diana Elmore, Denise Latshaw and husband Monte; grandchildren, Pamela Lemmings, Sunny Dawn Galaway, Terry “Tad” Miller, Tyler Latshaw, Tobi Vick; great grandchildren, Savannah Lemmings, Tori Meek, Ryan Looman, Kyla Miller, Gavin Miller, Chloe Miller, Logan Vick and Dace Vick and a host of other family and friends who will deeply miss him.

The family of Medgar Dean Beaver "Frog" created this Life Tributes page to make it easy to share your memories.