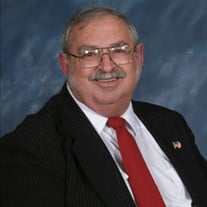 Marvin Thelmer Smither was born on January 23, 1948 in Madill, OK to Thelmer Alonzo Smither and Wanda Arvella (Marble) Smither. He grew up in Madill, after having attended the entire 12 years there, graduated from Madill High School in 1966. After high school, he attended one semester of college at East Central University in Ada, before enlisting in the United States Navy. After his honorable discharge in 1971, he enrolled at Southeastern Oklahoma State University in Durant, graduating in 1976 with a Bachelor's degree in Wildlife Conservation. Marvin dedicated almost 30 years to the State of Oklahoma, Office of Juvenile Affairs, working with and trying to salvage our wayward teenagers. Marvin often joked that he was doing what his degree was in (Wildlife Conservation)...He would ask the question; What is our most valuable natural resource that we need to conserve? The answer being..."Our future generations." and then he would go on to state that some of them has a pretty wild life!! Marvin married his high school sweetheart, Carol Sue Bigger on December 20, 1970 in Madill, Oklahoma. That union produced two wonderful, beautiful daughters, Valerie Michelle Smither and Theresa Anne Smither, both of the home. Marvin and his family have made their home in the Milburn Community since 1980. Marvin has been a member of the First Baptist Church of Milburn since 1983, serving in the capacity of Deacon. He has also been an adult Sunday School Teacher, music leader and youth leader. Marvin enjoyed helping others. Marvin was preceded in death by his parents, Thelmer and Wanda Smither. Marvin is survived by his wife Carol and his two daughters, Valerie and Theresa, all of the home, one sister and brother-in-law, Ava and Butch Morton of Harrah, Oklahoma; sister-in-law and brother-in-law Sharleen and Bobby Bridgman of Aubry, Texas; and brother-in-law and sister-in-law Tony and Char Bigger of Madill, Oklahoma, 6 bonus daughters who thought of him as their second Dad, numerous nieces, nephews, cousins and friends. Pallbearers are Jeff Rowland, Tyler Rowland, Ken LaFevers, Roger Lawson, Justin Whalen, and Ike Bryant. Honorary Bearers are Robert Kinney, Dallas Boggs, and James Rowland. Services will be held on Tuesday October 13, 2020 at 11:00 AM at the Milburn First Baptist Church with burial following at Condon Grove Cemetery. Visitation will be Monday evening October 12, 2020 at DeArman-Clark Funeral Home in Tishomingo. Services are under the direction of DeArman-Clark Funeral Home of Tishomingo. Please send online condolences to www.dearmanfuneralhome.com

Marvin Thelmer Smither was born on January 23, 1948 in Madill, OK to Thelmer Alonzo Smither and Wanda Arvella (Marble) Smither. He grew up in Madill, after having attended the entire 12 years there, graduated from Madill High School in 1966.... View Obituary & Service Information

The family of Marvin Thelmer Smither created this Life Tributes page to make it easy to share your memories.