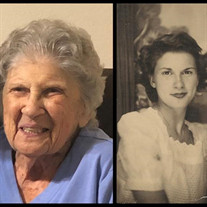 Martha Ann Trotter was born to Douglas and Ila Mae Trotter in Tishomingo, Oklahoma on February 28, 1932. She grew up in “Tish” and as a teenager she was very proud of the instruction her mother had given her and her sister in home economics. She followed proudly in the footsteps of her sister Sarah Garrett, who she admired greatly her entire life. Martha, Sarah, and her future husband, John Kimbrough, grew up together and John practically lived with Doug and Ila as teens. He ate dinner with the Trotter family nearly every night. Martha was a member of the 1950 graduating class of Tishomingo High School. She attended Bethany Nazarene College, now known as Southern Nazarene University. Subsequently starting out with a variety of positions in the workforce including traveling sales for a manufacturer of funeral products through Colorado, Kansas, and Oklahoma. Martha married John Kimbrough, her childhood sweetheart, on October 4, 1969. They shared the beginning of their devoted life together in Hobbs, NM and later moved to Chinle, AZ where she became the Food Service Director for the Chinle Public School District. She was most proud of the ten memorable years she and John spent in public service on the Navajo Indian Reservation. Moving back to Tishomingo, Oklahoma in 1980, Martha was employed at the Bank of Johnston County, where she became close acquaintances with numerous local customers and many Johnston County residents. She spent a lot of those days as a care giver to her elderly parents. Martha is a longtime member of the United Methodist Church of Tishomingo and became a charter member of “The Terrific 10+”, a group of church friends who had developed a strong personal friendship bond through traveling and fellowship together. Martha loved and had a passion for reading and staying current on local, statewide, and national events. She loved trivia and often would come up with informative conversation. She loved Johnston County history and was proud of her membership in the Historical Society. Some of her most memorable times were spent working alongside her husband baking delicious pies for everyone, clean up his kitchen mess, and then gave him all the credit. She was passionate in her devotion to husband, John, and has now fulfilled her end-of-life desire to be with him in Heaven. Martha was preceded in death by her parents, her sister, and her husband. She is survived by a son Charles and wife Cindy Kimbrough of Oklahoma City; grandchildren Lucas and wife Jessica Kimbrough; Katie Hearn and husband Steven; Adam Smith and wife Kristen; great grandchildren Miles, Sidney, Lily, and Gram; nephew Marcus Garret and wife Donna, nieces Barbara Hogelin and Traci Robertson. A special thank you to Cheryl Blount, Director at Canoe Brook Assisted Living in Ardmore. She and her staff went above and beyond to make Martha’s life comfortable. The family thanks Good Shepherd Hospice in Ardmore for comforting Martha through the end. A celebration of life will be held at 10:00 AM on Saturday, September 25, 2021 at the Tishomingo Cemetery Pavilion.

Martha Ann Trotter was born to Douglas and Ila Mae Trotter in Tishomingo, Oklahoma on February 28, 1932. She grew up in &#8220;Tish&#8221; and as a teenager she was very proud of the instruction her mother had given her and her sister in home... View Obituary & Service Information

The family of Martha Ann Kimbrough created this Life Tributes page to make it easy to share your memories.

Martha Ann Trotter was born to Douglas and Ila Mae Trotter in...