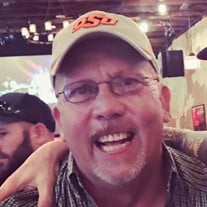 Mark Anthony Slover was born on October 21,1966 to Charles and Carol Slover. He left this earthly world on March 3, 2022 in Ada, Oklahoma at the age of 55. Mark was born and raised in Tishomingo, Oklahoma. He was the second oldest of 4 brothers known as “The Slovers”: Mike, Mark, Monty and Marty. Mark attended Tishomingo Schools and was a graduate of the Class of 1984. While in high school, Mark enjoyed playing football and showing cattle. He was quarterback and co-captain of the football team, Mr. Indian, and FFA President. Mark had a true talent for public speaking. During his senior year, he received the honor of being elected a State FFA officer and served as the Southeast District Vice President. Mark also served as a congressional aide to Congressman Wes Watkins. He attended Murray State College and was a member of their Livestock Judging team. Mark later attended East Central University and received a Bachelor's degree in Counseling. Mark always enjoyed working with cattle. Some of his best memories were made during his time working as a ranch hand for Meinecke-Boyd Ranch in Tishomingo. Mark was a loyal and devoted son, brother, uncle and friend. He was the kind of person who would drop whatever he was doing to lend a hand to somebody in need. One of the ways he demonstrated this was by being actively involved in the Johnston County Reaching Out organization. He enjoyed lively conversations with friends and hanging out at Scotty’s Blue River One Stop. Mark was also the founding and sole member of the Bullard Chapel Security Detail and was also known as the Acorn Road patrolman. Mark was preceded in death by his parents. He is survived by his three brothers: Mike Slover and wife Kelly of Sulphur, OK, Monty Slover and wife Cassandra of Tishomingo, OK, Marty Slover and wife Whitney of Fillmore, OK. stepdaughter Nicole Punneo and stepson Joe Morales both of Duncan. Nieces and nephews: Lauren Unwin and husband Ray, Aaron Elliott, Sloan Slover, Callen Slover, Keaton Slover, Raelynn Unwin and a host of other family members and friends. Funeral services will be held on Monday, March 7, 2022 at 11:00 am at DeArman-Clark Funeral Home. Interment to follow at Condon Grove Cemetery in Milburn, Oklahoma. Family hour will be at DeArman-Clark Funeral Home on Sunday, March 6, 2022 from 3:00-5:00 pm. Those serving as pallbearers will be Mike Lovett, Lee Lovett, Kevin Lovett, Marvin Blood, Wes Harden and Glen Lafitte. Honorary pallbearers will be Joe Morales, Stan Parks, Luther Harbert, Keith Boyd, Charles “Mojo” Neal, James Stallings and Rick Sallee. In lieu of flowers, the family requests that donations be made to Johnston County Reaching Out.

Mark Anthony Slover was born on October 21,1966 to Charles and Carol Slover. He left this earthly world on March 3, 2022 in Ada, Oklahoma at the age of 55. Mark was born and raised in Tishomingo, Oklahoma. He was the second oldest of 4... View Obituary & Service Information

The family of Mark Anthony Slover created this Life Tributes page to make it easy to share your memories.