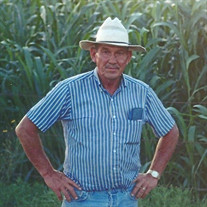 Funeral Services to honor and celebrate the life of Marion Franklin Norton will be held at 2:00 PM on Monday, August 26, 2019 at the Reagan Community Center. Interment to follow at Troy Cemetery. Family and friend hour will be held on Sunday from 1:00 - 3:00 PM at DeArman-Clark Funeral Home. Marion Franklin Norton age 80, passed from this life on August 22, 2019 at his home in Reagan, OK with his loving family by his side. Marion was born on April 5, 1939 in Reagan, OK to Eastman Norton and Myrtle Hazel Miller. He was a graduate of Mill Creek High School in 1957 and went on to work for the Mill Creek Sand Plant for 13 years. Three years after high school he married Gerrie Booth Norton on May 13, 1960. Out of this marriage he had two children; Melissa Ann Brackin and Kristi Dawn Davis. Marion and Gerrie divorced in 1973. Marion then went on to become a housing inspector for the Chickasaw Nation and also served as a field superintendent for Keel Construction. After leaving Keel Construction, he went on to start his own company, which was Norton Construction. During his career, Marion built many homes and several unique building for the Chickasaw Nation at Kalihoma and took a lot of pride in what he did. He was baptized and of the Church of Christ faith. Marion had a servant’s heart and was always thinking of others before himself. A wonderful father, grandfather, friend and so much more to all who knew him and he will be deeply missed. He is preceded in death by his parents, Eastman and Myrtle Norton; his grandparents who raised him, John and Dixie Miller; grandson, Luke Davis. He is survived by daughters, Melissa Brackin of Milburn, Kristi Dawn Davis and husband Allen of Reagan; grandchildren, Kenny Eubank of Sulphur. Talesha Womble, Savanah Windham, Kaylee Davis; great grandchildren, Phoenix Eubank, Tylee Thomas, Kody Luke Walker, Rainee Womble; sister, Hazel Upton and a host of other relatives and friends who will forever miss him.

Funeral Services to honor and celebrate the life of Marion Franklin Norton will be held at 2:00 PM on Monday, August 26, 2019 at the Reagan Community Center. Interment to follow at Troy Cemetery. Family and friend hour will be held on Sunday... View Obituary & Service Information

The family of Marion Franklin Norton created this Life Tributes page to make it easy to share your memories.

Funeral Services to honor and celebrate the life of Marion Franklin...