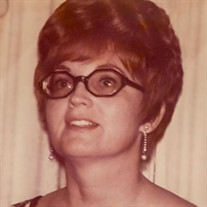 Beloved Marilyn Stewart, born and raised of Sulphur, Oklahoma passed from this life on Tuesday, January 4th, 2022 at the age of 84. Marilyn was born August 7th, 1937 in Britton, Oklahoma to Katheryn Ann French of Arkansas, and John Byron Stewart of Oklahoma. Marilyn was an eleventh generation of American descent from the Roulstone Clan of Renfrewshire, Scotland. Her family first settled in the Boston Colony in 1649, and over the generations migrated southward through Virginia, Tennessee, Missouri, Kansas, until her family ultimately participated in the Oklahoma land run. Marilyn attended Bethany and Putnam City Oklahoma schools until the age of 14 when she moved to Texas with the family of her best friend Janis to attend Technical High School in Fort Worth, Texas. Marilyn and her two younger sisters spent much of their early years with their Aunt Mae in Sulphur whom Marilyn adored and loved deeply. Sulphur is where Marilyn learned to swim at the Vendome Plunge, and she developed a lifelong love for the water. Marilyn would meet John Phillip Thurman at a swimming outing in Fort Worth Texas and later marry him in Weatherford, Texas in August 1954. Soon after, at the age of 17, Marilyn moved to Venice, California with her husband and their 6-week-old first child, Phyllis. Their family quickly grew to four children and daughters Phyllis, Debra, Dorothy, and a son, John were born of their marriage. Marilyn later married Robert Cunningham in November 1962. Bob welcomed her four young children with love and the family grew with the birth of their daughter Anita Cunningham born of their marriage. Marilyn and Bob led busy lives with two careers and five energetic children. Still, Marilyn and her husband loved their nights out together dancing the night away at the Moose Lodge in California. During her life in Southern California, Marilyn would later obtain her high school degree from Venice High School and Marilyn also graduated with an Associates Degree from Los Angeles College. Marilyn became a businesswoman working 27 years for the Los Angeles Unified School District(LAUSD) and rose through the ranks from a part-time pastry cook to LAUSD Food Services Area Manager overseeing 33 schools and training other supervisors. All the while she could wear high heels and stylish business suits like nobody’s business. Marilyn and her cohort of “food services ladies” introduced many new programs for the students in the school district including developing a robust scholarship and mentoring program. She was beloved by her many friends and students alike. Marilyn started in the Girl Scouts 61 years ago as her eldest daughter’s first leader and continued all the way until she acted as her granddaughter’s leader in Sulphur, where she retired to after her stint in California in 1995. Marilyn has touched the lives of countless girls, mentoring them in social, outdoor, and community skills, always with a smile and a big dash of fun. Marilyn was a devoted mother, grandmother, and great-grandmother. She enjoyed spending time with her five children, eleven grandchildren, and twenty-three great-grandchildren. She shared her love of the Lord through her missions with United Methodist Women, serving in many roles including chapter president. She was beloved by her many friends in Oklahoma and her biggest joy was spending time, mentoring, and loving to pieces all her grandchildren and great-grandchildren. Marilyn was preceded in death by her mother, Katheryn French, and father, John Stewart, and nine siblings Jack Stewart, Robert Stewart, Don Stewart, Gene Stewart, Betty Lane, Nancy Chadwell, Sue Tilden, Judy Barnato, and Roberta Stewart, all Sulphur born and raised. Marilyn is survived by her daughter Phyllis Grant, daughter Debra Lynch and her husband James, son Dr. John P. Thurman and his wife Setsuko, daughter Dorothy Thurman, daughter Anita Cunningham and her eleven grandchildren: Christopher Grant, Justin Grant, Amber Grant, Denise Grant, Laurence Thurman, Anthony Battee, Devon Coleman, Robert Holden, Marilyn Trussell, Shelby Holden, Ashlee Holden, as well as twenty-three great-grandchildren all across the country. Pallbearers: Son, Dr. John P. Thurman, grandsons Chris Grant, Anthony Battee, Robert Holden, Laurence Thurman, Patrick Trussell, nephews Mark Casebolt , Beau Chadwell . Marilyn’s great-grandsons will serve as honorary pallbearers. Services will be held at 2:00 PM, Monday, January 10th, 2022 at the Sulphur United Methodist Church, with Rev PJ Stewart officiating. Interment will follow in Oaklawn Cemetery under the direction of DeArman Funeral Home of Sulphur. online condolences may be sent to www.dearmanfuneralhome.com

Beloved Marilyn Stewart, born and raised of Sulphur, Oklahoma passed from this life on Tuesday, January 4th, 2022 at the age of 84. Marilyn was born August 7th, 1937 in Britton, Oklahoma to Katheryn Ann French of Arkansas, and John Byron Stewart... View Obituary & Service Information

The family of Marilyn Stewart created this Life Tributes page to make it easy to share your memories.