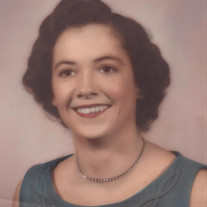 Margie Lee Hill was born January 9, 1929 at the family home-place in Cole, OK to Lee Henry & Lilly Mae (Waggoner) Price. She entered eternal life on Tuesday December 8, 2020 at her home in Sulphur, OK surrounded by her loved ones at the age of 91 years 10 months and 29 days. Margie grew up in Cole, OK alongside her brother and sisters. She attended school in Cole, OK through the 8th Grade. She attended High school in Blanchard, OK where she graduated in 1945 at the age of 16. This is where she met and fell in love with her High School sweetheart, RJ Hill. They were married at her parents’ home on May 21st, 1948. After getting married they lived in Oklahoma City where they started their family. After leaving Oklahoma City in 1960, they lived in numerous places before moving to Sulphur, OK in 1963. This is where they settled down and built the home they currently reside in today. Margie worked briefly at Stromberg Carlson before starting to work with R.J. as an office manager and bookkeeper at Hill’s Heating and Air, the business they started together. Margie’s life was centered around her family. She devoted much of her time and energy to her family. She took on the role of homemaker while helping run the business and raise their family. Her love for her children was immeasurable and it was exhibited in the way she cared for each of them. She was known for her home cooking. There were many Sundays spent gathered around the dining room table. So many memories were made while fighting over the last spoonful of creamed potatoes. This tradition started in the late 80’s and continued until her health declined and she was unable to do it anymore. She had a kind spirit and always saw the best in others. She enjoyed sports, she especially loved them when her kids or grandkids were playing. You would find her on the sidelines cheering them on. She was their number one fan. She loved sweets and her morning trips to the donut shop. She loved her grandchildren, who called her Mema. To her great-grandchildren she was known as Mema Honey. Although she was tiny and frail, she was tough as nails. She was a monumental influence in the lives of all she encountered. She gave us all courage and hope and reminded us daily of the preciousness of life. She undoubtably loved her husband with all her heart. They were married for 72 years, 6 months and 17 days. She was preceded in death by her parents Lee and Lilly, her sisters Eva Colquitt and Geneva Price, her brother Marvin Price, and Son-in-Law Jim Moss. Margie is survived by her husband RJ Hill of the home. Sons: Terry Hill and wife Lisa of Sulphur, OK, Randy Hill and Kristy Hudson of Sulphur, OK Daughter: Tammy Moss of Sulphur, OK, Special Daughter-in-Law: Judy Hill of Edmond, OK 6 Grandchildren and 13 Great- Grandchildren: Jerrad Hill, wife Karissa and children Lauren and Mason of Edmond, OK. Jeremy Hill, wife Theresa and children Katherine and Henry of Tulsa, OK. Amy Lynn Hill and children Christopher, Katelynne, Jordyn, and Alayna of Davis, OK. Andrew Hill and son Matthew of Davis, OK. Casey Moss, wife Chris and children Grayson and Tucker of Cole, OK. Dakota Moss, wife Stephanie and children Hadley and Caden of Newcastle, OK Pallbearers are grandchildren: Jerrad Hill, Jeremy Hill, Amy Hill, Andrew Hill, Casey Moss and Dakota Moss. Services will be held Monday December 14, 2020 at 10:00 AM at Crossway Baptist Church Chapel officiated by Rev. Bill Leveridge. Burial will be 1:00PM Graveside at Blanchard Cemetery under the direction of DeArman Funeral Home online condolences may be sent to www.dearmanfuneralhome.com

Margie Lee Hill was born January 9, 1929 at the family home-place in Cole, OK to Lee Henry & Lilly Mae (Waggoner) Price. She entered eternal life on Tuesday December 8, 2020 at her home in Sulphur, OK surrounded by her loved ones at the age... View Obituary & Service Information

The family of Margie Lee HIll created this Life Tributes page to make it easy to share your memories.