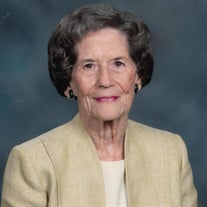 Margaret Perle Ray, a resident of Sulphur was born June 17, 1920 in Ada, Oklahoma to Homer J. & Ophelia Perle (Fain) Sarrett. She passed away Tuesday April 7, 2020 at Okla City, Oklahoma at the age of 99 years 9 months and 20 days. She was the youngest of six children. Margaret graduated from Ada High School and East Central University, where she was President of Pi Kappa Sigma Sorority. It was there she met her future husband, Jack F Ray of Sulphur. The two were married on Sunday, June 21, 1942 in Toledo, Ohio, just before Jack left for his WWII assignment to the 384th Bombardment Group 8th Air Force in Europe. After the war, the two returned to Sulphur as owners of L & R Food Market and later named Jack's Foods at 12th and Broadway. Margaret will be remembered as the kind lady at the checkout stand, who worked alongside her husband for more than forty years. Later in life, she became an outstanding duplicate bridge player and served as President of the Sulphur Duplicate Bridge Club. Margaret also was a member of P.E.O. and the Sulphur Garden Club and an avid Oklahoma Sooners Fan. She was a faithful member of the United Methodist church and was a baker of outstanding pecan pies. To her family she will be fondly remembered as the traveling grandmother with boundless energy who ventured down the Amazon at 80 years young. She was preceded in death by her parents, her husband, Jack on March 9, 1986 and 5 siblings. Margaret is survived by her son and daughter and their spouses as well as four fabulous grandsons. They are Philip and Alison Ray of Exton, PA Brian Ray of Tampa, FL, and Christopher Ray of Pottstown, PA. Also Marsha and John Funk of Oklahoma City, OK, Jack Funk of Manhattan, NY, and William Funk of Brooklyn,NY In lieu of flowers, the family requests donations to the Sulphur United Methodist Church youth and children's programs, the Sulphur/Davis P.E.O. Chapter college scholarship fund for high school girls or the Sulphur Library. Private services will be held Friday April 10, 2020 at 12:00 Noon at DeArman Funeral Chapel (attendees limited to 10 people or less) officiated by Rev Jim Shepherd. Burial will be at Oaklawn Cemetery under the direction of DeArman Funeral Home. Online viewing of service will be on the DeArman Funeral Home facebook page (when we go live it will tell you). Online condolences may be sent to www.dearmanfuneralhome.com

Margaret Perle Ray, a resident of Sulphur was born June 17, 1920 in Ada, Oklahoma to Homer J. & Ophelia Perle (Fain) Sarrett. She passed away Tuesday April 7, 2020 at Okla City, Oklahoma at the age of 99 years 9 months and 20 days. She was... View Obituary & Service Information

The family of Margaret Perle Ray created this Life Tributes page to make it easy to share your memories.