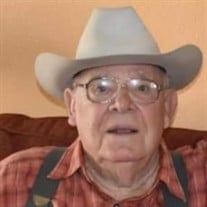 Lester Joe Powell was born on December 28, 1934 in Pauls Valley, Oklahoma to Frank Powell and Gertrude Gardner. He passed from this life on Sunday, June 28, 2020 at his home surrounded by his family. Lester went to school at Homer in Ada, Oklahoma. At a young age, he was baptized at the Homer Baptist Church and him and his school buddies helped to build the church. He met the love of his life, Eva Lou Henderson, at the Wallville County Store just ten miles from Lindsey, Oklahoma. The two married on April 3, 1953 in Ada, Oklahoma and have been married for 67 years and 3 months. Lester went to work at the age of 16 on a farm for $5.00 a day, sun up until sun down. At the age of 18 he went to work at Hox Rig Lumber Company. He hauled mud to drilling rigs and lumber to homes. Lester and his family moved to Tishomingo in August of 1966 to help his brother in law, Melvin Brooks, build on the Milburn School. He worked with Clifford Anderson, Melvin Brooks, Mike Bivins and many others. In 1968, he started his own business as L & J Powell Construction and retired after 46 years. He built many homes in Tishomingo. Lester worked for a corporation of engineers in Texas and built a Head Start School in Mineral Wells, Texas. He also built apartment houses in Snyder, Texas and also all over Oklahoma. He taught his son James and son in law, Marion the trade of carpentry. Lester loved to fish, deer hunt, and squirrel hunt. He always said he was a “Mountain Man”. Lester loved all of his kids and his grandkids were all so special. He had eleven grandkids, 26 great grandkids and two little foster boys. He loved going to watch his grandkids play basketball and football. On Friday, he would drive 2 and a half hours to watch his grandkids at Oktaha High School. He would drive to football games wherever they were playing and also loved watching the great grandchildren play basketball and baseball. He loved to go watch a special young lady play basketball, Carolyn Lawley, whom he considered a granddaughter. For 28 years, he cooked fish for the Reaching Out. Lots of people did not see him there because he was always cooking the fish. In December of 2009 he received a citation of congratulations for his volunteer work from Senator Jay Paul Gumm. Not only was hunting and fishing some of his early favorite pastimes but later in life he also loved to cook. You could always show up on a weekend morning to expect biscuits and gravy to eat. One of his favorites were homemade dumplings; he enjoyed making a big pot and calling Mitchell and Brad to come over and get some. He loved making pecan pies for friends and family. He taught us all how to be better cooks. Lester is preceded in death by his parents, Frank and Gertrude Powell; sisters, Gladys Fulton, Dessie Davis, Bea Qualls, his baby sister, Ethel Powell Ezell; two brothers, Bud Beesley and Cecil Powell. Those he leaves to cherish his memories are his loving wife, Eva Lou Powell; daughters, Charlotte Manley and husband Marion, Dawanda Potts and fiancé Vance Nail, Debra Glover and husband Jim; son, James Powell and wife Donna; grandchildren, Brad Lawley and wife Jessica, Jennifer Jackson and husband Jeremy, Kristen Lawley, B.K. Glover and wife Stacey, Misty Rowland and husband Jeff, Michael Manley and wife Tiffany, Mitchell Powell and wife Jennifer, Brysen Powell and wife Amy, Brian Potts and wife Stacey, Krystal Cianeruso and husband Leandro, Carrisa Potts; 26 great grandchildren; sister, Stella Powell Harrell; and a host of nieces, nephews and friends who will forever miss him. A celebration of life will be held on Friday, July 3, 2020 at 1:00 PM at DeArman-Clark Funeral Home Chapel. In lieu of flowers, donations can be made to Reaching Out.

Lester Joe Powell was born on December 28, 1934 in Pauls Valley, Oklahoma to Frank Powell and Gertrude Gardner. He passed from this life on Sunday, June 28, 2020 at his home surrounded by his family. Lester went to school at Homer in Ada, Oklahoma.... View Obituary & Service Information

The family of Lester Joe Powell created this Life Tributes page to make it easy to share your memories.