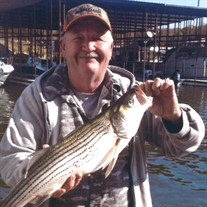 Larry was born in Lindsay, Oklahoma on August 19th,1952 to parents Francis Marion Bivins and Bessie Lee Beasley. Larry settled back in Tishomingo, Oklahoma in 1981 where he and Jan became pillars of the community. Larry grew up in Tishomingo, Oklahoma with his siblings spending most of their time hunting, fishing, camping, and running trout lines. Larry graduated from Tishomingo High School, shortly after he married his soul mate Jan Shelton. During their amazing 47 years of marriage they had many adventures including owning several businesses. Larry was active with the Boy Scout Troop 100 where he patiently taught many boys how to become young men. Larry enjoyed the great outdoors and any activities that included horsepower, lots of horsepower... He found his most enjoyment in teaching his son Jerry Dan how to go fast. Larry had an artistic side for the arts that was realized in the beautiful paintings that he created, he had an eye for photography and an uncanny ability to capture images through the lens that left the viewers wanting more. Larry found a love for gardening that most botanists would be envious of. He was known throughout Southern Oklahoma for his ability to restore antique Cuckoo Clocks and his clock collection was numerous. He was more than a “Handy Man”, Larry could fix anything. Larry had the kindest spirit of any man, always taking in strays, he never complained. He was the best father, grandfather, brother, uncle, friend and a great neighbor. He never knew a stranger, extremely generous to everyone he met. This last Saturday, November 21st, 2020 Larry lost his fight with stomach cancer. Larry passed away at home peacefully surrounded by his loving family. Larry was preceded in death by his loving wife Delilah “Jan” Shelton and their beautiful daughter Lory Janette Bivins. He is survived by his son and daughter-in-law Jerry Dan Bivins and Tammy Lynn Bivins and grandchildren Braxton Jerry Bivins and Hunter Wayne Bivins of Mannsville, Oklahoma. His siblings Jimmy Francis Bivins of Tishomingo, Oklahoma; Michael Lee Bivins of Valley, Washington; Betty Sue Morris of Ardmore, Oklahoma; and Bobby Lee Qualls of Nashville, Tennessee. Larry always said before he left, “See ya in the funny papers.” Services will be held this Wednesday, November 25th, 2020 at 11:00 a.m. Location of the indoor service will be at Dearman Funeral Home, Clark Funeral Services at 305 E Main St., Tishomingo, Oklahoma. A funeral procession will escort Larry to Condon Grove Cemetery in Milburn, Oklahoma where an ash scattering ceremony will follow. The family is asking masks to be worn during both ceremonies.

Larry was born in Lindsay, Oklahoma on August 19th,1952 to parents Francis Marion Bivins and Bessie Lee Beasley. Larry settled back in Tishomingo, Oklahoma in 1981 where he and Jan became pillars of the community. Larry grew up in Tishomingo,... View Obituary & Service Information

The family of Larry Edgar Bivins created this Life Tributes page to make it easy to share your memories.