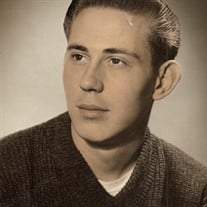 Funeral Services for Butch Sliger will be held at 10:00 AM Wednesday, October 9, 2019 at the First Baptist Church in Milburn, Oklahoma. Family hour will be held from 6:00 - 8:00 PM on Tuesday, October 8 at DeArman-Clark Funeral Home. Kindle Evais Sliger, also known as Butch to most, age 76 passed away from this life on October 5, 2019 after a long, hard fought battle with cancer. Butch was born on June 27, 1943 in Fillmore, Oklahoma to Calvin and Mary Dupree Sliger. He was a graduate from Milburn High School and spent the majority of his life calling Johnston County home but has lived in places such as Texas and Utah for brief periods. He was a hard working man and for many years spent his career running a printing press and after retirement of that he went on to start a sandblasting and painting company. He married the love of his life Lynda Trbovich on June 25, 1966 and had 3 wonderful children together; Ken, Dean and Anna. Butch was the jack of all trades and could fix or do anything that needed to be done. When he was working or tinkering on things you could be certain to find him outdoors. He was a man who loved hunting, fishing, and archery. Most importantly though, he loved his family dearly. Butch was a loving husband, father, grandfather and friend to so many and has touched so many lives and will be forever missed. He is preceded in death by his parents, Calvin and Mary Sliger; sister, Wyvonnia Culp; brother, Kip Sliger; nephew, Doug Sliger and niece, Lanette Cunningham. Those he leaves to cherish his memories are his loving wife of 53 years, Lynda Sliger; children, Ken Sliger and wife Janice, Dean Sliger and wife Jennifer, Anna Webb and husband Bryan; grandchildren, Cole, Kate and Liz Sliger, Cadyn Harrison, Boston Wingfield, Brayden Webb, Candace Harper; great grandchildren, Allie, Maddie, Addie Hice; brother, Houston Sliger and wife Donna of High Island, TX, Otis Sliger and wife Joann of Texarkana.

Funeral Services for Butch Sliger will be held at 10:00 AM Wednesday, October 9, 2019 at the First Baptist Church in Milburn, Oklahoma. Family hour will be held from 6:00 - 8:00 PM on Tuesday, October 8 at DeArman-Clark Funeral Home. Kindle... View Obituary & Service Information

The family of Kindle "Butch" Sliger created this Life Tributes page to make it easy to share your memories.

Funeral Services for Butch Sliger will be held at 10:00 AM Wednesday,...