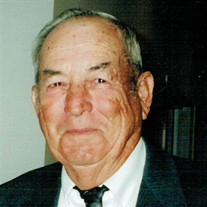 Kenneth Stanley Townsend 91, peacefully departed this life on February 16, 2020. He was born on November 10, 1928, in Pauls Valley, Oklahoma to Virgil Emmet and Anna Lou Townsend. He attended school in Stratford, Oklahoma and graduated in 1946. Kenneth was preceded in death by his wife Dolores Townsend, parents Virgil Townsend and Anna Lou and A.A. Forest, his brother V.E. Townsend, his grandson Jason Townsend and very recently his son Kenneth A. Townsend. He is survived by a daughter and two sons, Gayle (Townsend) Aab and husband Larry of Portland, Oregon, Andy Townsend and wife Sara from Wynnewood, Oklahoma and Stan Townsend and wife Laura of Ada, Oklahoma. Kenneth is also survived by many grandchildren and great-grandchildren. He served active military duty in the US Army from 1946 to 1948, and was in the Army Reserves until 1952. While in the service, he returned to Oklahoma on leave, to find and marry his high school sweetheart, Dolores McKinnon, on December 26, 1947. After graduating from the University of Oklahoma in 1951, he worked in oil exploration as a Geologist/Geophysicist through out Wyoming, North Dakota, New Mexico, Louisiana, and Oklahoma. While working for Sunray DX oil company in Tulsa, Oklahoma, Kenneth earned his Master's degree in Computer Science from the University of Tulsa in 1969. He was instrumental in establishing their first computer system to analyze oil exploration data. Computer technology took Kenneth down a different path from the oilfield. In 1971, he was employed to work for the State of Oklahoma, under Lloyd Radar, to create and implement computer data systems for the Department of Human Services. During this time, he also assisted the States of Oregon and Hawaii with their data systems. Later, Kenneth wanted to work closer to his home in Stratford, Oklahoma , to pursue his passion for farming and ranching in his free time. He became County Administrator for Pontotoc County and Department of Human Services in Ada, Oklahoma until retirement. After retiring, he returned to being an independent oil exploration consultant continued to farm and ranch and was owner/operator of Townsend Peach Orchard. Kenneth was a longtime member of Stratford Masonic Lodge #118, and a 32nd degree Mason. Visitation; will be on Friday February 21, 2020 at DeArman/Pickard Funeral Home Stratford, Oklahoma, from 5:00 PM to 7:00 PM. Services; will be 10:00 AM Saturday February 22, 2020 at DeArman/Pickard Chapel. Officiating; Kevin Driskill. Burial McGee cemetery Stratford, Oklahoma.

Kenneth Stanley Townsend 91, peacefully departed this life on February 16, 2020. He was born on November 10, 1928, in Pauls Valley, Oklahoma to Virgil Emmet and Anna Lou Townsend. He attended school in Stratford, Oklahoma and graduated in 1946. Kenneth... View Obituary & Service Information

The family of Kenneth Stanley Townsend created this Life Tributes page to make it easy to share your memories.