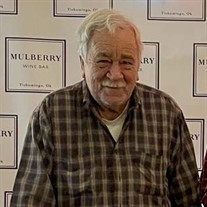 A memorial graveside service is being planned for Kenneth Lee Nichols, age 85, who passed away early Monday, January 3, 2022, at the family home in Tishomingo, Oklahoma. A graveside inurnment will be held at 2:00 PM on Monday, January 10, 2022, at Tishomingo Cemetery by DeArman-Clark Funeral Home. Kenneth was born December 7, 1936, to Earl W. and Clara (Locke) Nichols. He graduated from Tishomingo High School in 1954, Murray State College in 1956, East Central State University in 1958, attended the University of Oklahoma, and earned his master’s from Southeastern State College in 1966. He began his career in Farmington, New Mexico public schools before returning to teach English at Murray State. Kenneth retired from Southeastern Oklahoma State University, where he served as Chairman of Journalism after a 31-year teaching career. Kenneth was considered a great storyteller, an amateur artist, and a good carpenter. He loved making wood handicrafts for his family and friends. He published many articles in various newspapers and magazines, including Reader’s Digest. He also made many trips to the Navajo and Lakota reservations to collect rugs and jewelry. He was a 32nd degree lifetime member of Masonic Lodge #91 of Tishomingo and the Scottish Rite Temple of McAlester and a member of Tishomingo First Baptist Church. Kenneth was preceded in death by his parents, brother Dennis and wife Shirley, brother Charles, step-daughter Laura Robledo, grandson Adam, and mother to his sons, Dwanna. Kenneth leaves a very much loved family and friends: son Steven and wife Linda of Alvarado, TX, son Gregory and wife Paula of Ft.Worth, TX, sister-in-law Shirley of Ingram, TX, grandchildren Stevie, Denver, Dillon, London, and great-grandsons Shae and Jaxon; and his wife, Nora Rios of Tishomingo, and her children Roy, Monica, Adam, and their families.

A memorial graveside service is being planned for Kenneth Lee Nichols, age 85, who passed away early Monday, January 3, 2022, at the family home in Tishomingo, Oklahoma. A graveside inurnment will be held at 2:00 PM on Monday, January 10, 2022,... View Obituary & Service Information

The family of Kenneth Lee Nichols created this Life Tributes page to make it easy to share your memories.

A memorial graveside service is being planned for Kenneth Lee...